I'll admit - I wasn't able to watch the ASG last night.  But I will also say, I wasn't all that upset by it.  I did watch the highlights to see Malkin tally two helpers on the night.  I also saw how the East managed to nearly squander a 5-1 first period lead.

But I can't allow myself to get too overly critical.  After all, it's the ASG.  It's sheer purpose is to market the sport and make it look like every game ends at the high scoring mark of 8-7.

Regardless, the All-Star circus is over.  From hereon in it's all going to be about hustling on the ice and maintaining a .500 record.  However, considering the inherent disaster that is the Eastern Conference standings, .500 hockey may just not be good enough to hit the playoffs.  All the Pens can hope for now is that other teams in the conference and/or division don't pick up a mean win streak now that the ASG is over.

There are, however, still media outlets who are writing off the Pens' playoff contention.

Take this article for instance.

But all-star weekend won't be the same without Sidney Crosby, who suffered a high ankle sprain last week that could keep him out eight weeks and kill any chance his Penguins have of making the playoffs.

Clearly this person hasn't been watching Malkin take over every inch of the ice.  It's easy and brainless to be a critic - you just have to possess the unoriginal skill of ignorance.  As evidenced, the writer of that article is just working in his natural state.

There was a lot of this yesterday. 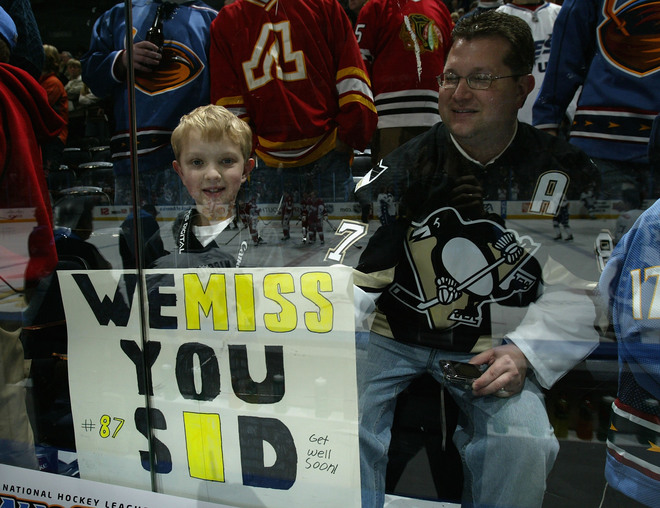 Again, I didn't watch the game, but were the announcers and all super "We miss Sid" too?  I know some guys didn't seem to care.

"Injuries happen, but the game must go on."

Perhaps we can take that as his nice way of saying "Shut up already, we know, we know..."

Currently the Atlantic Division is headed by the Flyers and Devils, each tied with 59 points.  The Pens sit with 58 right behind them, but amazingly at sixth place in the conference.

The trouble is this: tomorrow night the Pens play the Devils and the Flyers play the Kings.  Should the Pens win in regulation, they'll temporarily hold first with 60 points.  If the game goes to an OT or a SO loss, the Pens will finish with 59, the Devs with 61 and if the Flyers lose in regulation, may hold steady tied with Philly for second.

Basically this Devils/Pens game is an attempt for each team to shoot themselves in the foot in the standings.

So, here's to a Penguins win, Devils regulation loss and Philly regulation loss so the Pens can prove to the media that they're entirely wrong about their Sidless predictions.

[EDIT 5:19PM]
I decided to promote this from the comment section only because it's worthy of such.  That, and the fact I forgot to put it in earlier today...

This video is rated M for Mature.