Share All sharing options for: Penguins 4 Devils 2 - [EDIT] Move a Point Behind Philly 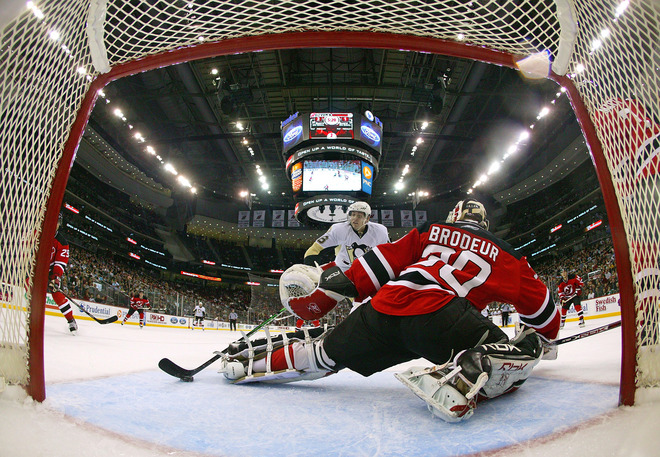 Lemme just preface this blog with a small, tiny little diatribe about why I hate the Prudential Center.  If you don't want to read this, then by all means shoot down past this bold and italicized text and continue on with the recap.

Why did the Devils leave Continental?  Sure, the place was a dump - but it was nice and accessible.  The powers that be claimed a move to the ghetto of Newark would help clean up the area and bring in more fans via public transportation.  No, it doesn't.  The fans still don't show up to the games and the transportation lets you off in an area you'd rather not want to walk at night.  On top of that, if you drive in (like I did tonight), the entire city is shut down in efforts to mediate traffic congestion.  It doesn't work.  Only in Jersey do 5 lanes of traffic exit a major highway to condense into one city block.

And to top it all off, parking in a street lot is a costly $25.  Go. To. Hell.  (no pun intended)  I hate to say it, but I'd rather be in Philly for the game.  Easier to get too, cheaper parking and less tolls.  But it is Philly.

I could've kept going, but I just can't find it in my heart to hate amidst a Pens win and tie for first.  So I'll leave it at that, and save the rest for another night.  (Perhaps next Monday when they meet again.)

On a side note - I wish I didn't misplace my SIM card.  I had some stellar pictures of the Pens warming up, and a picture I dub "The Devils Fan Club."  5 minutes before the puck dropped, empty seats easily outnumbered those claimed.  And so, when I saw an entire section filled with only 3 people, I thought it too funny to pass up.  I'll have that pic by next Monday.  Promise.

The first period was a bit nerve racking at times but good nonetheless.  Rupp's (who?!) goal in the first was just a garbage goal past a diving Conklin.  Considering how solid the Devils' power play looked at this point, I was a little nervous about any future ones.

Thankfully the first came and went with only a small Devils' lead.  The Pens looked pretty shaky in the first, but would definitely pick up the pace heading into the second down 1-0.

In fact, they'd waste no time.  Jordan Staal received credit for a goal that looked pretty absurd in-person and even more ridiculous on the replay.  I hardly remember seeing where he touched the puck, but it slipped pass Brodeur regardless to tie it up.  I know there was also some question to it because it wasn't until 5 or 10 minutes later that they added Talbot and Christensen on for helpers.

It'd be another 12 minutes or so before the game would see its next goal.  Unfortunately it came off the stick of a Devil - Mike Rupp (who?!) again to be exact.  The jumbo-tron flashed up Rupp's stats, and I have to admit - I laughed.  Only against the Penguins does a guy who has been scoreless all season score his first and second goals.  Never fails.

It's ok though, he wouldn't celebrate for long.  Less than a minute later the Pens charged back.  The puck gets mishandled in the Devils' zone and Christensen winds up with it in front of the net.  Did he ever fool Brodeur out of his pads.  A quick slip of the mitts and the puck trickled pass Marty to tie it up yet again.

By this point the Penguins were holding their own, although playing a game of catch-up hardly works in the NHL.  With that in mind, the Pens decided to put the Devils to the test; and Ryan Malone was the teacher.

Malone continued the second period scoring on a dish from Sykora/Malkin to get the quick and small edged 3-2 lead heading into the third.

In the third period, still ahead 3-2 and looking to add more security, Gonchar finds Sykora who finds Malone for the 4-2 power play goal.  Special thanks to Sergei Brylin on that one.  His contributions from the Devils' penalty box were truly a test of his character.

From there-on-in the Pens dominated the puck, shutdown the power plays and continued to pressure Brodeur even when it seemed obvious the win was in there hands.  Therrien must've given them a good speech after the first, because they sure as hell played the game like another team from the second period on.

Solid play from Malone and hey, let's also give a nod to Christensen.  Hopefully he can keep this motivation going tomorrow night at the Pens head into Atlanta.  Lord knows the team needs to scoring depth. 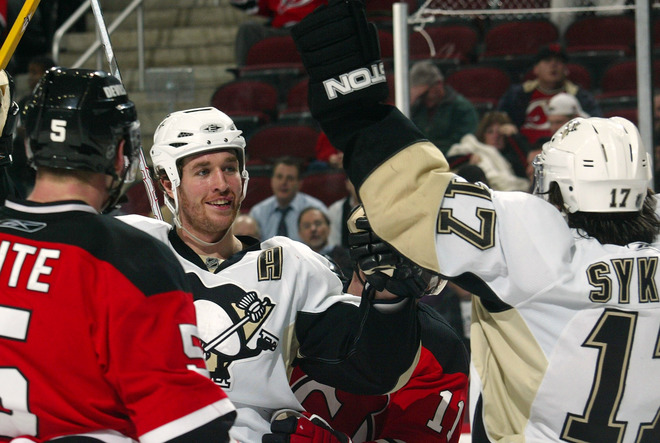 Kris Beech has apparently been facing some issues with his visa at the border into the states.  I guess even the border guards can't believe he was traded between three teams in less than a week.

Colby is out with symptoms of the flu, but according to the medical staff they are not ruling out the possibility of mono.  When you think about it, the flu might be a bad bug to get around the locker room, but mono + shared water bottles = disaster.  Here's the hoping it's just the flu.

And finally, despite having time to heal up during the break, Adam Hall is still struggling with what has been dubbed a groin pull.  Let's hope he doesn't take the path of the Blackhawks' Justin Williams, who has recently been sidelined with a sports hernia.
Initially, it was diagnosed as a groin pull.

With the win tonight the Pens passed New Jersey in the Atlantic Division standings.  Unfortunately, the Flyers also won over the Kings.  Now, Pitt is one point behind Philly while the Devils still loom close behind.  These are the moments in the playoff race that really drive you crazy.  Luckily the Pens let Philly get their wins out of the way early in the season, because there won't be many more for them to rely on for the rest of this year.

[EDIT - 10:34am] Considering the lateness in which I typed the article, combined with my inability to add, the Pens are in fact one point behind the Flyers in the Atlantic.]