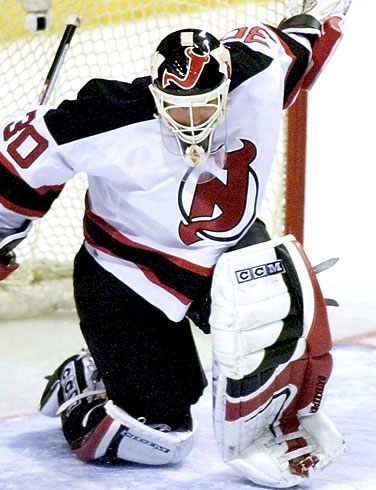 The New Jersey Devils comes to Mellon Arena Saturday night to open up the Penguins' season in Pitt.  You know the deal by now:  For the past 15 years Martin Brodeur has stood between the pipes for the Devils.  Shutouts, saves, wins, etc. - he's the real deal.  And chances are before this season is over he'll have his share of goaltending records to brag about.  But I feel he's hardly the issue this time around, as the Devils of old and the Devils of new combine for a trip out to Pitt.

Devils of old is right.  Whereas teams like the Pittsburgh Penguins look for veteran leadership, that is not an issue for the Devils.  Vets like Marty Brodeur are the backstop to the franchise, but returning Stanley Cup winners like Brian Rolston and Bobby Holik, compounded by the likes of John Madden put them one Brendan Shanahan move away from being a retirement home.

That's not to say you can rule them out though.

John Buccigross ranked the Devils sixth in the Eastern Conference in his ESPN preview the other day, whereas NJ papers put them at first in the Atlantic.  Personally, I like the idea that writers are not considering the Pens as "top" contenders this season.  After all, getting picked as Stanley Cup winners by USA Today last season worked out so well...

Similar to the Penguins, the Devils also have a new defenseman they're working with; Ansii Salmela.  He's not known for his offense (nor is any Devil for that matter outside of Zach Parise), but the kid can hit and throw his weight around.  I'm actually looking forward to seeing how the Pens handle him.

Finally, tomorrow's game is a bit of a welcome home present for Pittsburgh-area native Bill Thomas.  According to the Trib-Review, this isn't Thomas' first regular season game on Mellon ice, but it is the first time outside of the preseason that Pens fans will cheer for him.

Don't forget, sign up and get those SPG picks in for a chance to win a Pittsburgh Penguins wall clock.  I've also just received word from Versus that they're going to throw me some more free stuff to give away - so that will also have some inclusion in the contest.  I just have to see what they send me first...