Share All sharing options for: Crashing the Net: Marc-Andre Fleury saves the point 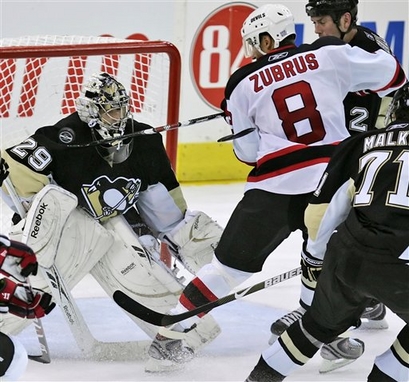 Finally got around to watching last night's game through and through. Wow, Marc-Andre Fleury was insane.  Honestly though, for as many shots as the Devils took on him they really didn't have that many chances.  Most of them were right to his chest, glove or easily pushed aside.  The Penguins' defense did a solid job of keeping the Devils on the boards and away from the rebounds, but no fan should be satisfied in giving up 49 shots.

Let's look on the bright side of things: the Penguins have yet to lose in regulation.  Starting a season off 1-1-1 is way better than 1-2-0, so we'll take the pity points where we can.  It was also nice to see Miroslav Satan shut us up a bit with a goal in the first period, but it was unfortunate that the offense couldn't muster up anything else throughout the game.

"If he's not there, it would [have been] a horrible game.  They played a way better game than we did. You get beat, one on one all over the ice, you're not going to win many games."

Not that one couldn't argue that it was a horrible game; horribly boring in fact.  Even Sid mentioned that without MAF they don't get the point.  Valid point.

And speaking of Sid, HockeyJenn was right - he really laid out to block a few shot last night, huh?  Good to see.  Even though I watched the game I still waited to see him get up with a limp.  Considering the history of injuries and this team, I wouldn't rule it out.

And the lines...how bout them lines?  Did Daryl Sydor REALLY play left wing last night?  Brooks Orpik was used the same way a few times last season, but the end result in both instances failed to produce results.

Sydor is still baffled by the move, and seems slightly ticked about it in that sort of subtle anger sort of way:

"I'm going to keep to myself, be a professional and work hard."

Results are exactly what the Devils got last night.  If you shoot enough of times you're bound to get goals.  Whether those goals go off a defenseman's skate or not shouldn't matter.  If you get to the puck to the net that many times good things are bound to happen.

We need Sykora back, and he'll no doubt come back with a vengeance.  Rest assured he hasn't exactly been living it up in his down time.  In fact, he couldn't be more annoyed with the circumstances:

"It was one of the worst weeks I had in a long time because I just sat in the hotel room,.  I didn't really see [Stockholm]. I didn't play games. I didn't practice. Basically, I just sat there and watched TV for a week. It's not something I'm going to be telling my kids about probably."

On a final note, we have ourselves a three-way tie already for the Penguins wall clock, courtesy of CarrollsCove.  SheenaBeaston, NathanV and Bryan each have three points.  Don't look any further than that.  Nothing to see at the bottom.  Trust me.