Share All sharing options for: Pascal Dupuis saves the game in 3-2 OT win over Philadelphia Flyers 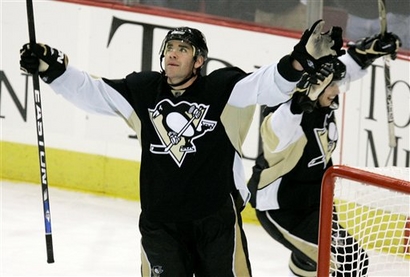 Seriously, can the Penguins win a game in regulation this season?  What's with this edge of the seat overtime tension?  Honestly though, I'm not complaining.  After the Pens gave up two goals in less than a minute in the second period I was happy to just see them secure overtime and the point.  But I'll gladly take the win.

Did anyone by any chance count how many times the announcers said the puck "pinballed" around the zone?  It must've been at least half a dozen times.  I'm no announcer, but references like that are good once or twice a game every other week or so.  Mix it up and keep it fresh.  You don't want to be John Madden.

For those of you who made your SPG picks, looks like Brooks Orpik gave you all a run into the boards.  Did anyone see that one coming for the first goal?  Didn't think so.  Last season Orpik scored his first goal in over 100 games against the Carolina Hurricanes.  Evgeni Malkin was so overjoyed he gave the puck to Orpik thinking it was his first career goal.  Take it as proof that if you throw the puck on net good things will happen.  Orpik also tallied his second point on the night with the break-out pass to Pascal Dupui's game-winner in OT.

Outside of the second period, Marc-Andre Fleury looked flattering in net.  He definitely saved the game late in the third with a right pad save and came up big with some quick cover ups.  Good to see.  Rebounds used to be an issue in the past, and it seems Fleury's skill level is improving with age.

The power play, however, is still another story.  1-for-6 beats Philly's 0-for-6 any day, but the fact Brooks Orpik netted the PP goal should pose as evidence to the notion that the top lines aren't getting it done right now - still.   And I'm just gonna throw this out there, but Sid looks a bit lost on the ice.  Feel free to argue with me though.

Rest assured the PP will come around soon.  They have to.

The good:  Any win over Philly is a good thing.

The bad: The Pens collapsed pretty quick in the second to allow the Flyers to make up a two-goal deficit in under a minute.  Had that period been longer, who's to say how it would have turned?

The ugly: Eric Godard's first period fight against Riley Cote was downright nasty.  No doubt a thing of beauty in the physical sense, but both of those guys are going to look like someone used their face as a speedbag tomorrow.

Next game: Thursday against the Washington Capitals at 7:30.