PIttsburgh Penguins give up a three-goal third, lose to Washington Capitals 4-3

Share All sharing options for: PIttsburgh Penguins give up a three-goal third, lose to Washington Capitals 4-3 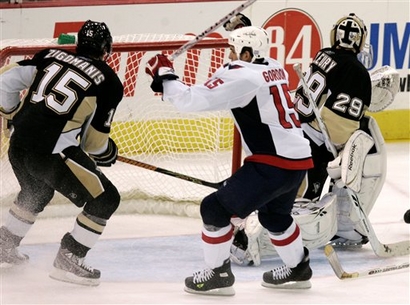 Unbelievable.  I had to shoot out of the house during the second period when the Penguins were up 2-1, so I tossed it on record and figured I could see some more Pittsburgh goals later in the night when I got home.  When I checked on a score from the ol' mobile device, I was happy to see 3-1.

On a night when the power play finally showed signs of hope with a 3-for-6 performance, the Penguins gave up three consecutive even-strength goals to the Washington Caps.  I can't grasp this.  At what point did this game go to hell?

The Penguins played a disciplined third period, giving up zero penalties.  None.  And yet Washington just picked their way through the Pens.

Consider this: The Capitals were held to nine shots over the first two periods.  They followed that poor performance up with a display of 21 shots in the third for a total of 30, four more then the Penguins shot the entire game.

The first Capitals goal in the second was just a shot that put Fleury out of position on horrible play in the Penguins' own zone.  The second, a laser past Fleury - no other way to describe it.  On the third, the defense died and left Fleury hanging out to dry and he still almost made the save.  And the final one was just a tease off the inside bar.  It looked like a crossbar hit, but deep down in your gut you saw the goal coming.

The good: Goligoski and Letang are looking more comfortable on the blue line and don't seem the least bit hesitant to shoot.  It was a weird goal for GoGo, but no complaints here.  On the goal at least...

The bad: The Penguins lost a game they should've won.  No question.

The worse: Sidney Crosby cost the game-tying goal with an attempt at some fancy stick work.

Fight clip of Bissonnette vs Bradley hopefully up tomorrow.

Next game: Saturday, 7:00 against the Leafs.