Share All sharing options for: Sidney Crosby and Evgeni Malkin tally four points each in 4-1 win over Leafs 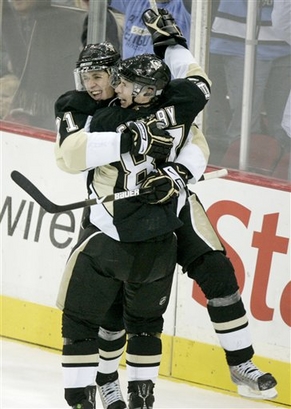 Halfway through the first period I was prepping myself for a very bitter and angst-ridden post.  The Penguins only took three penalties in the first period, but they practically took them back-to-back-to-back.  Not to mention, Goligoski's penalty was a double-minor because his high stick drew blood from the upper lip of Alexander Steen.  Nevermind the fact it looked like Steen nicked himself shaving - the refs saw blood, so the Pens had to deal with it.

But I guess the sight of blood made the Pens thirsty for more because from thereon in the PK unit was worked to no end.  Basically  for six minutes or so the Penguins were stuck in their own zone, grabbing a quick breather on the occasional clear.  This would ultimately lead to Toronto's only goal on the night.

Enough about that though.  Let's talk Sid.  We all knew he wasn't happy with his minus-3 performance in Thursday night's game.  If he ever wanted to make a statement that it was officially behind him then he did it tonight.  One goal and three assists for a total of four points is just about as good a way to brush off a bad game.  Even though that goal was sponsored to us in part by the Leafs' Mikhail Grabovski's diving attempt to stop a puck that would have easily cleared the crease.  We can add him to the list of helpers - right under the Capitals' Niklas Backstrom.

And Geno - what about Geno?  He had a helper on every goal as well for four points of his own and just barely had a shot kicked out by the 79-year-old Curtis Joseph.  We'll get em next time, a few times over I'm sure.

Overall a solid win.  It's way too early in the season to say it was a must-win game, but following the Capitals debacle Thursday night it came pretty close.

Oh yeah, and just an FYI - I called a Sykora goal in the notes section of the Open Thread.  Just thought I'd throw that out there.

The good: Crosby and Malkin rack up four points each

The bad: Undisciplined hockey killed Fleury's attempt at a shutout

The ugly: The Maple Leafs' 1-for-7 power play

Next game: Monday against the Bruins.