Miroslav Satan - on pace for a 40+ goal season?

Share All sharing options for: Miroslav Satan - on pace for a 40+ goal season? 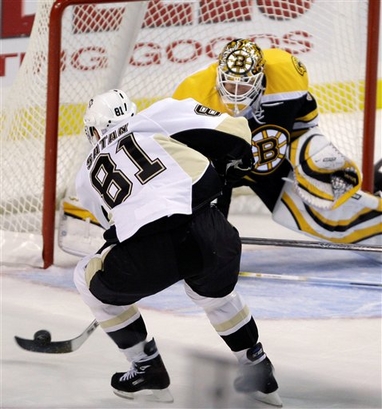 Miroslav Satan.  We dogged him, or at least most of us did, within the first few games of the season.  Perhaps we were too quick to judge.  Maybe we just went with what we saw on the ice.  Whatever the case may be, the Pens didn't win the other night because he was lazy.  Not one bit.

When he came charging out of the penalty box to add to the Sid/Malkin attack, he couldn't have been in a better place at a better time to slam home a rebound past Tim Thomas.

So naturally, I was aghast at an article in today's Trib-Review regarding Satan as an underrated scorer.  I honestly don't think he's underrated.  Not one bit.

Don't get me wrong - the Trib isn't bashing Miro.  In fact, they are acknowledging the fact that he should definitely garner more attention for what he brings to the ice.

The old saying goes, "you score goals in bunches."  I think that definitely holds true for Satan.

Right now we're inside "the bunches."  Over the first seven games for the Pens, Satan has six points.  What's more, four of those six are goals, all of which came in the last five games.  After notching his first of the season against the Devils, Satan was held scoreless and pointless in the following game against the Flyers.  He shot right out of the gate again when the Capitals came to town, tallying a goal and an assist in that disappointing loss.  He tagged one in Toronto two days later and of course had that one when he came flying out of the box the other night.

[Satan] is on pace for a 47-goal season. That would leave him tied for the 13th-best single-season total in club history with teammate Evgeni Malkin (2007-08) and former captain and five-time scoring champion Jaromir Jagr (1996-97).