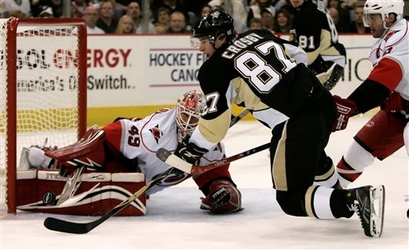 The Pittsburgh Penguins played the better game.  You knew this as you watched the first two scoreless periods.  The Pens had plenty of chances early on, accentuated by nothing more than the resonating ping of a goal post.

40 minutes of play and a one-goal deficit.

And then, they exploded.

Two goals in 32 seconds, - triggered first by an Evgeni Malkin slapper that was redirected by Sidney Crosby to tie up the game, followed shortly after by Ruslan Fedotenko's first goal as a Penguin on a dish from Tyler Kennedy.

But why stop there?  Max Talbot tagged the game-winner three minutes later to put the Penguins ahead 3-1.

All things considered, a three-goal third was a sympathetic end.  The Penguins had countless chances to open it up even further before Malkin's empty netter sealed the 4-1 victory.

Frankly, and I don't know how you feel, but I'm giving credit to the Carolina kid Michael Leighton.  He looked impressive in net, despite getting lit up for three in the third period.  The Canes may have a future in net from this guy.

Just in case you didn't hear, this game also put Jordan Staal and Eric Staal up against one another.  Believe it or not, they're related.  And they come from a hockey family.  And there is another brother in the league and another on the way.

The Good: Amazing comeback.  Four goals in the third?  I'll take it any day.

The Bad: Sid has to watch his retaliation penalties.  He snap back at Eric Staal earlier in the night canceled out what would've been a power-play opportunity.

The Ugly: Eric Godard's fight...JDunman will have more on that later.

The worth mentioning: Marc-Andre Fleury's shot at the empty net.  Admit it - you yelled something as you saw it sail down the ice, bounce and redirect off net.

Random thought: Paul Bissonnette is well on his way to taking the trophy for fan favorite.  That first period fight rallied up the crowd to no end.  It just took the Penguins two periods to catch the vibes.