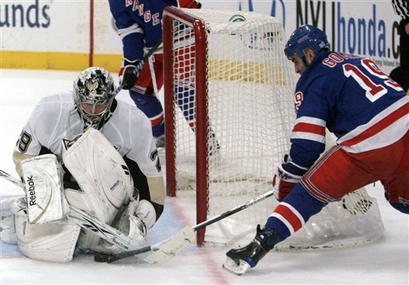 Can you even blame Fleury?

For the Rangers' take, check out Beyond the Blueshirts or NY Rangers blog.

15 seconds...the puck makes it to the neutral zone.

Rangers win in the shootout.

I get it.  The Penguins will either come back from behind to win like they did the other night against the Hurricanes, or they will give up the lead like they did last week to the Capitals.

Tonight was a Capitals game.

And then it all went to hell.

The Penguins, who were up until the third period staying on pace with the Rangers' shots, decided they were going to slack off and let the Rangers take control.  New York out-shot Pitt 18-2 in the third.

Sadly, Marc-Andre Fleury looked amazing in net the entire game.  Yet it was much like the Devils' comeback on October 12th - if you give them enough chances they're going to take it.

Well the Rangers took those chances.  After Lundqvist skated to the bench with less than 30 seconds remaining, all the Penguins had to do was control the puck.  Get it into the net or get it deep into the Rangers' zone and control it.  Freeze it.  Put it into the corners.

They didn't.  Rangers scored.  We lose.  Game over.

The problem: The Pens dropped a two-goal lead.

The solution: Pepto Bismol cocktails for all

Next game: Tuesday against the Sharks.  10:30.  Don't want to think about it right now.