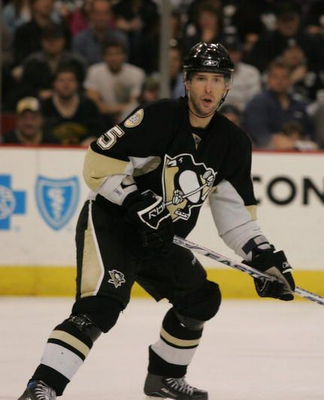 I was going to include this in this morning's Crashing the Net installment, but I didn't want it to get buried.  Frankly, I feel it's worthy of a bit more attention.

So in case you missed it this past weekend, Darryl Sydor asked the Penguins for a trade.

Defenseman Darryl Sydor, who returned to the lineup this past week due to Hal Gill's injury, has asked the Penguins for a trade. Sydor knows substantial ice-time won't come with the Penguins, especially when injured defenseman Ryan Whitney returns in December from a foot injury. The Penguins will be more willing to move Sydor upon Whitney's return.

Part of me can't blame the guy, ya know?  It's not like he's getting the sort of a respect a veteran defenseman wants.  I'm not saying he necessarily deserves it, especially with all of the negativity surrounding his alleged tense relationship with Michel Therrien last season.  That's the sort of thing you keep in the locker room.

The other part of me however wants to know 'why,' in a general sense.

Why does Therrien keep him scratched when he's, in my humble opinion, playing well out there?  Why does Therrien treat him like the odd man out when he netted a goal this past weekend and showed some excellent play in the Pens' zone?

And then there's the when - when will the Pens get rid of him?

The what - what can the Pens get for him?  If I had to guess I'd say not much.  And, much like the Trib-Review said, the Pens will be more comfortable moving him when Whitney returns.

Admired as a professional athlete, you have to hope that Sydor won't go out there and dog it just because he doesn't want to play in Pitt anymore.  Hopefully this won't come off as a Manny Ramirez on ice spectacle.  But I personally just feel Sydor has been unwelcomed since he came to the team two seasons ago.