Where is the offense? Sharks beat Penguins 2-1

Share All sharing options for: Where is the offense? Sharks beat Penguins 2-1 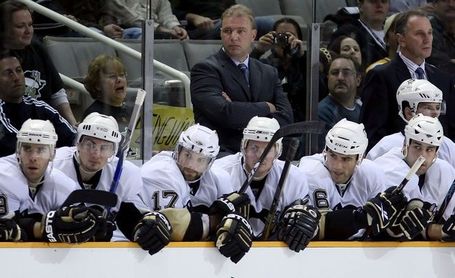 For a Sharks perspective, check out Fear the Fin.

FYI - I don't normally do this, but I know a lot of us missed this one because of the Pacific start.  I've attached full video highlights courtesy of NHL.com after the jump.

The Penguins didn't really muster up an attack until the third period with less than five minutes remaining.  In a 2-0 game I guess all hope is not lost by that point, but for a team that has recorded less than a dozen shots over the ENTIRE GAME?  Yeah, I'd say you can write it off as a loss.

Was this a matter of quality over quantity?  Yes and no.  Yes, because Evgeni Nabokov was forced to make a few ridiculous saves, much to his credit.  But the Pens can't expect to go up against a team like the Sharks and get nit picky with shots.  Quantity over quality - get the rebounds and hope for good things.  That's more or less what the Sharks did with all 34 of their shots.  Must be nice...

Gotta give a nod to Sabourin as well.  He played an extremely disciplined game for a guy who hardly had any help on the other end.  I'd imagine it's frustrating, and rightfully so.  Then again, he also had some help from the crossbar on a few chances as well.

This shot thing HAS to change.  Three shots in the first, five in the second and three in the third.  Disgusting.  They're lucky this wasn't a shutout.  Even the only goal of the night was an ugly one.