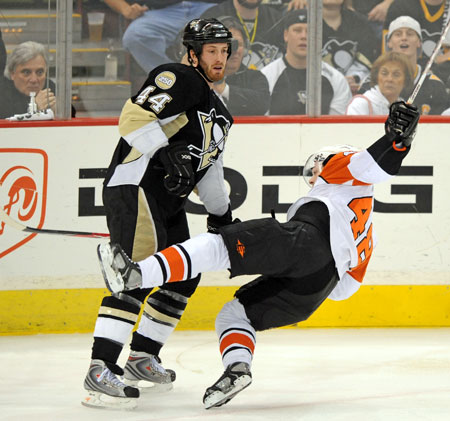 For those who have ever said hockey is boring, lacks action or is just downright dull, then the entire nation must be hockey fans because last night's vice presidential debate was about as boring as life can get.  You'd be better off watching ice freeze than watch those two duke it out.

But speaking of politics - of hockey at least, the Penguins announced two new alternate captains.  To replace the 'A' left behind by the still-bitter Ryan Malone, decrepit Gary Roberts and banged up Sergei Gonchar, the Pens assigned Evgeni Malkin and Brooks Orpik as the team's choice for the leadership roles.

Michel Therrien eluded to his top picks for the 'A' last week but did not officially confirm it until last night's game in Hesinki, Finland.  Both Orpik and Malkin were the Penguins' two biggest contributors during the injury-ridden run last season.  In my mind there was no one else in consideration and so it's a deserving and well-rewarded accomplishment.

"It's something new.  I'll just keep going the same way. I won't do anything differently. It's a pretty tight team. Leadership comes from a lot of different places. But it's definitely an honor, especially with the group we have here."

Take this time to glance over at that countdown on the right side of the page.  You see that?  Yes, we're getting close.  We'll touch base with some Sens coverage later today and see what the Pens have in store for them as they open up the NHL's season in Stockholm tomorrow afternoon.