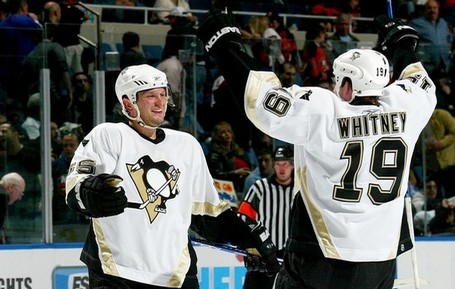 This isn't exactly the kind of list you want to brag about.  The Hockey News listed their top 10 biggest preseason injuries and the Penguins unfortunately take home both the number one and number two spots.

At the second spot is Ryan Whitney, a defenseman who no doubt got under the skin of Pens fans everywhere last season when he hardly played up to par.  Then there was that sense of slight shame that came during the offseason when you realized the guy was gutting it out through pain every night just to get out there and rep for his injury-plagued team.  Damn, I still feel stupid for that one.

Then, of course, at the number one spot is Sergei Gonchar.  THN writes:

Gonchar runs the Pens’ power play and is the veteran and offensive leader of an otherwise thin defense corps. He’ll be out four to six months and with colleague Whitney out as well, Pittsburgh is in some real trouble.

Anyone who backs Pittsburgh will agree - this isn't the best of starts to the season.  But hardly anyone is overly worried about it, maybe because most fans adapted to the injury bug last season.  Not to mention, the promise of Kris Letang and Alex Goligoski gelling the blue line for the Pens this season is hardly something to hold your concerns about.

All in all I think the Pens will hold up just fine, but getting these two guys back ASAP would also be nice.