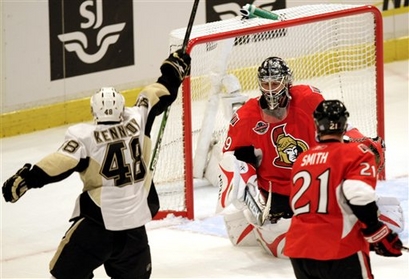 And the best part?

He wasn't even supposed to start.

In fact, it wasn't announced until a short time before the game that Petr Sykora would be a scratch and Kennedy would replace him.

Talk about a move that benefited the Pens.

Overall, how do you think the team looked?  I was happy with the power play unit  despite their inability to convert with over eight minutes of time in the first period.  I was also happy to see a game with a ton of shots - 30 for Pitt, 35 for Ottawa.

What I wasn't happy with, but I'll dismiss in light of the win, is Eric Godard's apparent issues with agitators.  I have no doubt that Godard could've, would've and some would even argue should've knocked Chris Neil out.  But at the time when he took his penalty the score was 2-1 Pens.  The penalty turned in favor of the Senators, tied the score, and before the period ended it was 3-2 Ottawa.  That one penalty and his desire to drop mitts shifted the momentum of the game and nearly cost the Pens a win.

The Lucky: Eric Godard, for not costing the Penguins the game and ultimately saving himself from a three-month stint in Therrien's dog house.

I'm going to try and find that quote again.