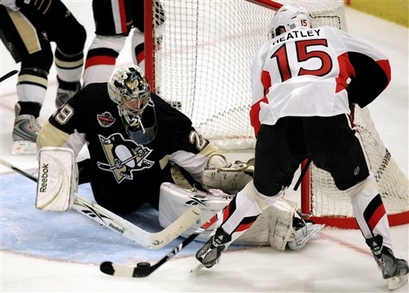 Wow - that one hurt.

I said in the notes section of the Open Thread that I didn't assume the Penguins would win.  I didn't expect a near shutout, but I should really learn to keep my mouth shut.

Alex Auld just dominated the Pens; there's no doubt about it.  Compared to Gerber's display in net yesterday Auld looks like Patrick Roy.

But hey - no shutout.  And that's all due in part to Alex Goligoski netting his first ever NHL goal with 1.3 seconds remaining in the game.  Wonder how Auld is feeling about that one...

Let's talk power play.  And by that I mean, let's talk about how bad the Penguins look.  Next time you watch a game, just mute it when the Penguins are on the power play because frankly all you're going to hear about the absence of Sergei Gonchar and his apparent God-like status on the blue line.  And you know what?  They're right.  But it's something the Penguins will deal with.  There's just no other way around it.

But 1-for-9?  Burn.  Heed these words: Goligoski will shoot more.  He has no choice at this point.  And frankly, JDMaker1 will agree, he had a few good looks on net where he opted to pass the puck instead of unleash a shot.  Kennedy did it a lot last year, Malkin did it his rookie year - it's just part of adapting to the league.  But Goligoski has to understand his position with the team right now; he HAS to shoot.

The top line is another story all together.  Maybe we'll get into that later this week.  We now have a solid week before the Pens play again, and they have a long flight ahead of them.

The positive: Alex Goligoski nets his first goal.  Let him think about how good that feels on the flight home and how many more await if...he...SHOOTS.

The negative: The aforementioned power play.  1-for-16 in two games.

The neutral: Plenty of time to improve.  A split, despite Ottawa's one point from yesterday, is all we could have asked for.

Next game: Home opener on October 11th (Saturday) against the Devils.