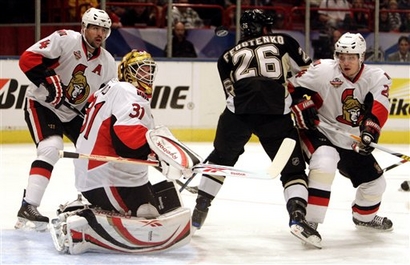 Don't forget to check in on the Pensburgh contest details

The Pittsburgh Penguins first line went through a significant change this offseason. The capital question was, "Who will play Sid's wing?" In efforts to add a fine support cast to an already dominant player, the Penguins went out and picked up Miroslav Satan and Ruslan Fedotenko from the free agent block.

After salvaging a 1-1 record from the opening games in Sweden, is it too soon to judge the top line for the Pens? Let's discuss.

Pensburgh user SteelCityKid has made it apparent in his analysis that he's not happy with Satan's performance on the line so far. I agree with SCK's accusations that Satan appears lazy, sluggish and somewhat sloppy on the power play as well. Is it possible he just can't keep up with Sid?

Ruslan Fedotenko poses as the highly touted addition. While his production was very quiet in the first two games (VERY as in 4 PIM and 5 shots), there is at least a fuse there waiting for Sid's spark to ignite a 25-30 goal scorer this season. Fedo just seems hungry, aggressive and alive compared to Satan.

This isn't to say Satan doesn't have his positives. I for one think he's a solid puck handler down low. I've said it before and I'll say it again until I'm forced to think otherwise. His control makes him a key component for a set up in the middle. But I almost feel as if this defeats the purpose of having him on the line. Sid is the set up guy; he's the one lacing passes and creating abstract art on the ice canvas. Not to mention, he's also the one that attracts the most attention. So if Satan is holding down the puck near the boards and Sid is getting mobbed by defenders, how does this benefit the team?

Satan should get his mitts dirty and get down low for rebound goals and deflections and leave the puck-handling to Sid. A fast-paced, leg-churning offense worked in the past, why not let it happen again? Keep the forwards bouncing around with Letang and Goligoski working the point. It's hard to rely on rebounds and point shots in the absence of that guy who wears the double fives, but that's no excuse. Let's see Letang and GoGo pelt the net. Allow Sid to work the puck down low and distract defenders away from Satan and Fedotenko. I think this would create some solid opportunities and definitely increase the conversion with the man advantage.

All in all I will admit, it's still way too early to overly criticize the first line. Two games on a quasi-NHL rink over in Sweden hardly equates to a fire sale of line changes. Therrien's ADD was acting up in full force by Game Two when he was simply pulling names out of a hat and throwing people on the ice together.

The Devils' defensive-minded system may pose as the best test to this line. Let's hope they produce a passing grade.

So I ask you this - can the top line get it done Saturday in the home opener against the Devils? Or will we see a boggling of the lines come November (or sooner)?