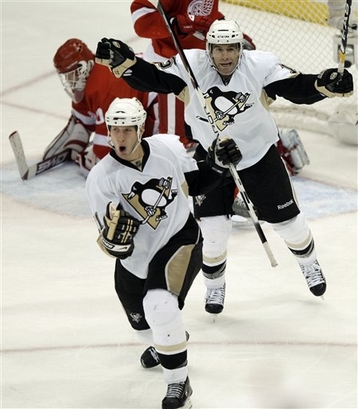 For the Red Wings' view check out Winging It in Motown

Was that not the greatest game you've seen all year?  It's not exactly payback for losing in the Finals, but hey, we'll take it.

Midway through the second when the Penguins were down 3-1 I reached for the ol brown-bagged whiskey bottle for salvation.  Yet as the clock wore down in the third and the bottle neared emptiness, I had no choice but to resort to that same bag in order to prevent myself from hyper-ventilating.

I say again, was that not the greatest game you've seen all year?

Fleury stoned Hossa on countless chances and the rest of the Penguins squad kept him relatively quiet on the night, save a few assists.  That right there is bitter sweet.

Jordan Staal had one of the best games of his career as he started AND finished a hat trick all in the third period.  Tag on his assist to Ruslan Fedotenko for the game winner and Jordan had himself a four point night.

Let's face it, this game was not a defensive standoff.  When the final score ends 7-6 it is anything but.  Yet the Penguins stayed neck and neck with the Red Wings later in the game and showed that they weren't about to give up on anything.

What can you say about a final score like this anyways?  Was it an ugly game?  A lights out win?  Hardly either.  The Penguins loused up a few times with penalties, five times total in fact that led to three Detroit goals.  Stupid penalties taken at inopportune times led to near heart attacks for everyone in the Open Thread.

But they did it.  They came back and cycled the puck, controlled the zone and followed up on their shots.  You have to, HAVE to give major credit to an unsung hero in this game, and that man is none other than Michael Zigomanis.  Without his key face-off wins, the goal that sent it to overtime would not have happened.  He is an animal in the circle and deserves every penny of his contract, contrary to what may show in the points category.

To think, I needed to relax midway through because I was losing my mind at how poorly the Pens were playing.  Now I have to relax at the end of it because of how insanely good they played towards the end.

Next game: Thursday, 7:30 against the Flyers in Pitt