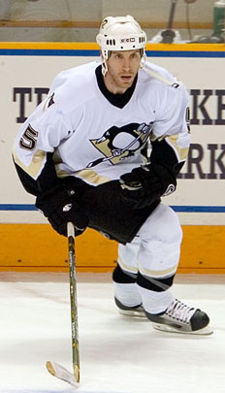 Rather than wait for the typical "undisclosed injury" report, I figured we could tackle this one as a whole.

Hey, it's never much fun to see a defenseman known predominantly for his shot blocking go down after he, well, blocked a shot.  In the case of Rob Scuderi this couldn't have had a bigger impact, especially when you consider how banged up the Pens' defense has been up until this point.

In last night's win over the Red Wings, Scuds blocked a shot with the outside of his right skate, more particularly by the high-top part of the skate/ankle.  Ever hit that bone that sticks out on your foot?  It's like hitting your funny bone.

Here, you can play from home.  Even if you gently knock on it with your fist it echoes throughout your whole foot.  Now magnify that by a hard piece of rubber going 90 mph.

Props to Scuderi for manning up and skating off under his own strength, but it was pretty obvious when he got off the ice that he needed some assistance.  I don't want to speculate anything is broken because frankly I don't want to jinx anything.  But I think it's likely we won't see Scuds in the lineup for the next game or two, especially since that next game is tomorrow night against the Flyers.

So with that in mind, I'm going to say it's a bruise.  Nothing too serious, nothing too complicated.  I don't want to rule out a potential fracture, but frankly I also don't want to even think about that.  Bruise sounds about right to me.

Rob Scuderi had a scare when he blocked a Niklas Lidstrom slap shot. He fell to the ice immediately and failed on several attempts to get back to his feet. He was helped off the ice and into the locker room. He returned late in the first period but couldn’t go after the first intermission.

According to that source he is listed as day-to-day.

Did you see the injury?  Any thoughts?