Share All sharing options for: Dany Sabourin, Alex Goligoski save Penguins in 5-4 shootout win over Flyers 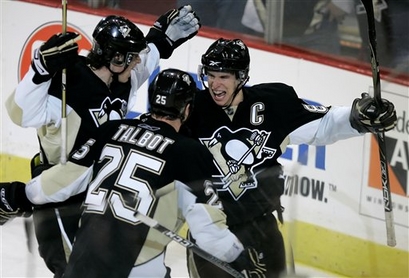 Let's recap, shall we?  The Penguins netted three quick goals in the first to jump out to an early and commanding lead.  But for all you readers and fans out there who watched the Edmonton Oilers game, you know three goals isn't enough for the 2008/09 Penguins.  Heck, five was just barely enough in that game.

Sure enough the Flyers charge back.  How is it the league's third best power play is held to a moderate 1-for-4 on the night but their penalty kill scored on two out of four chances?  The sheer thought of it nauseates me.  After a rough second period, Marc-Andre Fleury was benched in favor of Dany Sabourin.  This would ultimately pose as the best move of the night.

Alex Goligoski was well on his way into the coach's dog house.  He looked as if he gave up on the play when Simon Gagne busted in on Fleury.  He made a few blind, erratic passes that nearly led to Philly chances and he stumbled a bit on the transition game from blue line to blue line.  Things weren't looking so good for GoGo early on.

Sidney Crosby sent it to overtime for his second goal on the night and the shootout quickly followed.  Goligoski eventually posed as the only player to score in the sixth round of the shootout.  After Sabu stoned Hartnell and 'Sabu Slammed' him to the ice in a light collision, Goligoski skated off as the hero for the night.

Mark it: five in a row for the Pens, who remain undefeated in the month of November.

The good: Sidney Crosby for a clutch performance, Dany Sabourin for an amazing display during the shootout

The bad: The second period.  What happened there?

The ugly: The Pens' power play went 1-for-7 on the night and gave up more goals than they scored.  Not cool.

The hero: Alex Goligoski for his shootout goal

Next game: Saturday against the Buffalo Sabres in Pitt.