Penguins rally back with four-goal third to beat Sabres

Share All sharing options for: Penguins rally back with four-goal third to beat Sabres 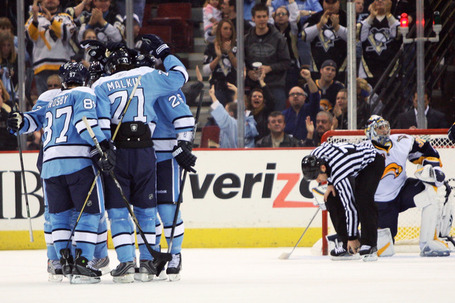 Lately any game the Penguins play looks more and more like a basketball game.  Why watch the entire thing when all you need to do is tune in for the last 15 minutes?

Well the Penguins rallied a four-goal third period over the Buffalo Sabres to steal a 5-2 win, their sixth in a row.  Despite a lack of action in the first two periods it was still an exciting game to watch from beginning to end.  Luckily it wasn't one of those give-up-the-lead sort of games.  Here's to hoping those are a thing of the past.

The night started slow for the Pens but they were able to gain some momentum behind the solid goaltending of Marc-Andre Fleury.  Going 2-for-6 with the man advantage didn't hurt much either.

Malkin's 13-game point streak continued with a stellar three-point game where he netted one and helped on two others.  For a team that had to 'settle' with him on the point during the power play, I'd say it's been working out pretty well for the Penguins.  And while Malkin will occasionally watch a puck skip over his stick, you can't rag on him for it.  More often than not the positives will outweigh the negatives with a guy like him working the point.

Also have to give some credit to Alex Goligoski.  Even though he slipped the game-winner past Marty Biron in the Flyers game Thursday night, he didn't play the best of games - he said so himself.  But tonight GoGo bagged the tying goal that started the Pens' rally off in the third while also getting an assist on Malkin's second period goal.  I think it's safe to say we have ourselves a franchise defenseman in the making.

The Penguins will test out the undefeated luck of the blue jerseys Tuesday night against the Wild.  Until then they remain 2-0 when sporting the baby blues.

The bad: The first period.  But we can put that one behind us.

The ugly: Max Talbot's face after that puck he tried to dodge.  Sorry Max, but at least you got this year's A&L commercial out of the way beforehand.

Next game: Tuesday against the Minnesota Wild @ 7:00