Putting Jordan Staal under the microscope

Share All sharing options for: Putting Jordan Staal under the microscope 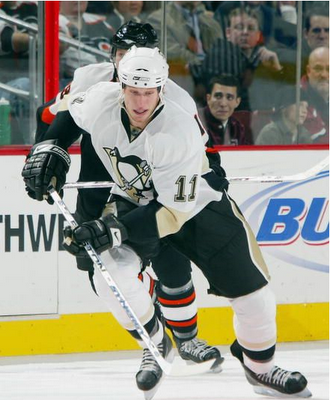 Edit: I plan on moving this story up again later in the day/tomorrow.  Just as I posted this news of Sydor was confirmed so I jumped on that...

Jordan Staal has been on fire for the Pittsburgh Penguins lately, there's no denying that.  Coming off a rough 28 point sophomore season in 07/08 (12G, 16A), the Penguins - and fans - were really hoping to see Jordan Staal kick it into high gear on offense.  The 2008 campaign started off looking like a continuation of last season.  In fact, Staal went through the first 11 games of the season without registering a goal, yet managing to tally three assists on the scorecard.

Enter the last few games.  Staal lit the lamp for the first time this season on November first against the St. Louis Blues en route to a 6-3 Penguins win.  Two games later against the Islanders, Staal would tag another one, ultimately leading up to his season-high four-point, hat-trick night against the Detroit Red Wings on November 11.  Thanks to last night's 5-2 win over the Sabres, Staal has another two goals to add to his season total of seven, already more than half of his goal production last season.

Even though two of his seven goals came as emptynetters, that doesn't negate the fact that he is starting to find the net.  The month of November has proven already to be a very profitable month for Staal, where one can even argue that the Pens are winning every game in which he scores a goal.

Rumors circulated earlier this season, and during the offseason, that the Pens would look to move Staal by the trade deadline.  Picking up his salary for next season might prove to be a trying task and something the Pens might not accommodate considering the heavy payloads of Malkin, Crosby, Fleury and Orpik.  As far as I'm concerned, if Staal keeps producing at this level it would be a travesty to let him go.  Granted it's still early in the season, but I can't see the Pens giving up a 20-goal (or more) scorer by the deadline.  That would just be absurd, especially with a playoff push on the way.

If a seven goal, eight-point November isn't a sign of things to come, I don't know what is.  With six games remaining in the month, combined with the Penguins current six-game win streak, I'd say Staal is only getting started.