Alex Goligoski - on pace for a team record?

Share All sharing options for: Alex Goligoski - on pace for a team record? 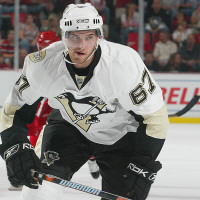 Apparently Goligoski, who has scored three goals in 11 games, is on pace to score 22; undoubtedly shattering the team record for most goals scored by a rookie defenseman.  Currently Zarley Zalapski holds the record with 12, scored during the 88-89 season.

It's not likely if Ryan Whitney and Sergei Gonchar plan to return, but EmptyNetters still gives a solid look into team history.

I've said it earlier - I'm not a huge fan of those on-pace predictions.  Heck, even Miroslav Satan was on pace for a 40+ goal season at one point, something I touched upon last month.  Anything is clearly possible, but the old saying is that goals are scored in bunches and I think that's a justifiable way of looking at GoGo and Satan.  (Technically Satan is still on pace for 41.)

But hey, if Goligoski wants to score on a more frequent basis, be my guest.  It definitely couldn't hurt.  You wouldn't really know it with how they've been playing the past few games, but the Penguins are ranked seventh on the power play and fifth on PK.  Of Goligoski's three goals, two of them came on the power play.

This is exactly where the Pens wanted the fire power.  Ironically enough, in both instances when GoGo scored on the power play, the first against the Senators (his first NHL goal) and the second time against the Capitals, the Penguins lost the game.