Pascal Dupuis eligible to play in Thursday's game against Oilers

Share All sharing options for: Pascal Dupuis eligible to play in Thursday's game against Oilers 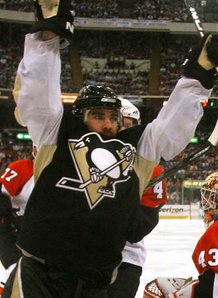 The mystery injury that surrounded Pascal Dupuis is mysteriously healed.  Just last week against the Phoenix Coyotes, Dupuis was hit by a puck in practice and rendered a scratch for the ensuing games against the Desert Dogs.  In typical NHL fashion no one really knows (outside of Dupuis and the staff) what happened, but it was apparently not too serious whereby he will miss a significant amount of time.

Dupuis was put on the IR prior to Saturday's game against the Blues to make way for Janne Pesonen and Chris Minard.  Following the game, the same two were sent back down to WBS (and went score crazy for that matter) and Dupuis was rumored to have a pending activation from the injured reserve.

Good news for the Pens who are still a bit banged up from that road trip.  Sykora is still fighting through some groin pain, while Ruslan Fedotenko has yet to take to the ice in what can only be described in such vivid detail as "an undisclosed injury."  Word arond the Interwebs suggests it was a puck during practice, but nothing officially says so.