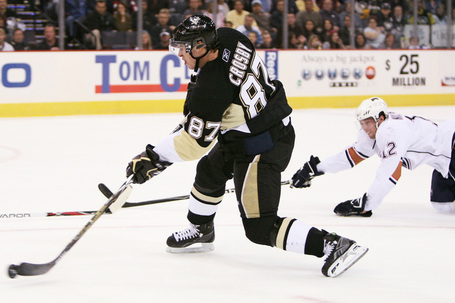 You know, when your team gets a 5-0 lead after two periods of play, you should at least feel moderately comfortable with that effort, right?  I mean, you should have confidence that nothing could possibly go wrong to cause a team to lose a 5-0 lead.

Well, thankfully the Penguins didn't drop the lead, but they did let the Oilers come close to stealing this one out right from under their noses.  It's a shame too because Petr Sykora and Miroslav Satan both combined for a tremendous night of goals, but those will now be overlooked in light of the near collapse.

And what - what attributed to this?  Mistakes and poor play.  When Pitt was on a 5-on-3 power play in the third period, Sheldon Souray busted out of the box and put away a short-handed goal to bring the Oilers within one.  At that very moment you have to admit your stomach was churning, your insides were decaying and your brow began to sweat.  I for one glance at the clock and allowed for Operation Countdown to begin.

We've all played that game before.  And frankly you can play from home.  All you have to do is have a team, preferably the one you root for on a regular basis, and have them drop a tremendous lead.  From there you watch the clock, counting down every second till the final horn and hope for the win.  It's an exciting game, with first place walking away with what they should have received with a surmountable lead anyway - the win.

It's a good thing the Pens were able to jump out to such a lead because this had the makings of a spoiler.  Then again, if the Penguins didn't have the lead and actually had to come back and earn it then maybe they would have played the rest of the game with a little heart.

I know one thing.  I don't want to be the fly on the wall in the Pens' locker room after this game.  Therrien is probably going on a tangent, and if I'm stuck to the wall eavesdropping I run a good chance of being hit by a flying object.

The good: The first period

The bad: The second period

The ugly: The third period

Next game: Saturday against the Islanders at 7:00.