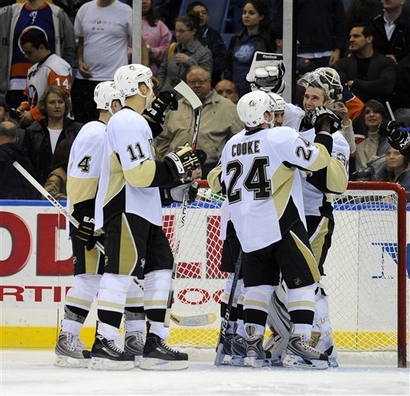 Jeez, talk about a cloudy call.  If I had to compare this to anything else, I'd say this is comparable to a batter coming up to the plate with bases loaded, two outs, a full count in the bottom of the ninth with his team down by a run (before the MLB decided to use instant replay).  His hit rockets to the outfield.  It's high, it's deep it's...was it off the foul pole?  Did it hit the wall?  Is this a home run?  Umpires say no and on the next pitch he strikes out.  Tough break, rough game, what can you do?

All week Dominik and I from Lighthouse Hockey have been sharing pointers on the Pens and Islanders.  The one conclusive point Dominik and I made was that both teams decide to stop playing in the third.  Even the boys on Hockey Night on Long Island said the team has fallen into an awful habit of giving up on the game. Tonight, much to the Penguins' advantage, the Isles chose to let up on the attack.  They didn't record their first shot of the period until there was three minutes left ticking down on the clock.  The scariest part is, they nearly scored.

And to think; the third period was the trying period for both teams tonight but overtime proved to be the trying test for the referees.

So we focus on the shootout.

Heading into the Islanders' last chance following Sykora's shoot-out goal, Sabourin makes what appears to be the game-winning save off of the Islanders' Trent Hunter.  Here's where the questions that start this post come into play.

Black and gold glasses not withstanding, I feel this puck literally planted itself inside Sabourin's pads down by the knee.  I think that was more than obvious to anyone watching.  At the same time it's absolutely impossible for the goal judges to make a definitive decision on this thing, regardless as to whether or not Sabu's leg was over the line or past it.

Now some would argue it doesn't matter.  Sidney Crosby was up next with the game on his stick, yada yada yada, game, set, match.  I can't believe that.  This was a tough break for the Islanders, no doubt.  But if I'm going to beat a team I want to know straight up that I beat them.  It'll be interesting to see the takes from different blogs on this one.

The good: Well, the Penguins won.

The bad: They left Sabu out to dry on two of the three goals.

The ugly: That final call.  Can't wait to go to the video tape on this one.