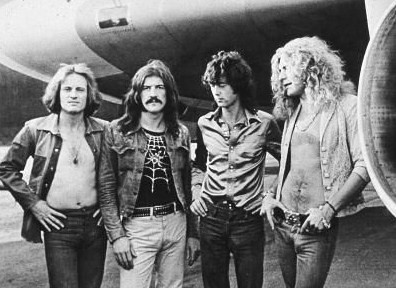 I've decided to challenge myself a bit here when it comes to doing a hockey blog round-up.  Basically, this idea spawned from having music on while reading some stuff online, so I figured I'd try and fuse the two together.  Maybe I'll work with another band next week.   We'll see...

The Pens Blog found a video of some kid who spends his spare time pretending he was drafted by the Toronto Maple Leafs.  A prime example of What Is and What Should Never Be.  He's also probably the kinda nerd that kills me repeatedly in Call of Duty 4.

Sid's number one stalker/fan Snoopy Jode is stoked by the recent quote from Sid as he Rambles On about life in Pittsburgh and how much he likes it here.  Perhaps we have another Mario-like tenure in the making?

If you've ever wondered what it's like to meet Sid, Steel City Sports Fan has an interview with one of the lucky season ticket holders who had The Kid deliver tickets to her front door.  Talk about Celebration Day.

Fear the Fin is hitting the campaign trail for Devin Setoguchi's All-Star appearance.  Since he's a West Coast star who's started a career by Going to California, I figured the least I could do is drop a vote for him (plus he's been pretty solid on the Pensburgh fantasy hockey team).

The Devils may have some reprieve on the way in light of all those injuries.  According to John at In Lou We Trust, Brian Rolston is looking to return without a practice.  We all know the process of a high ankle sprain and the Wearing and Tearing it takes on a player.  But you can't knock the guy for trying.

Our Friends over at Pension Plan Puppets are hosting a holiday contest.  If you have been lying to me all along and really are a Leafs fan then this definitely stands as a good chance for you to win some gear, lose my love and get blacklisted forever from Pensburgh.

The Sabres are having trouble beating bad teams.  It's left D.O. from Die By the Blade a bit Dazed and Confused over it all.  Hey, we can relate (Phoenix anyone?)

It may feel like Ten Years Gone since that whole Semin/Crosby thing, but apparently Sports Illustrated has something to say about it now too.  Japers Rink has it covered.  Some things just never die.