The Penguins and Senators kick off the first game of the first round tonight in Pittsburgh to a sold-out crowd.  The media hype surrounding the series will finally be put to the test.  In case you've missed it, allow me to fill you in.

The Ottawa Media has opted to take the "Sid should get hurt/the Penguins are pathetic for taking a loss to Philly" approach."  In other words, they're just scared to see the Penguins again because this time around they know it's not going to be easy.  Ottawa's locker room has been surrounded by motivational pictures of last year's final handshake in efforts to fire up the team. 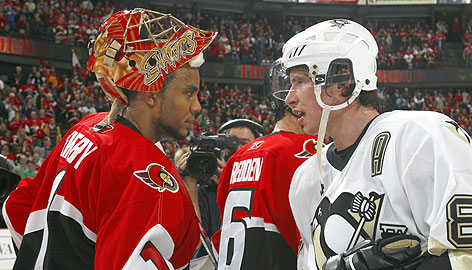 Apparently they need it...

What they definitely lack however is faith in a goaltender.  While Pittsburgh has seen Marc-Andre Fleury really come unto his own since returning from the 9 weeks of rehabilitation, Ottawa has not been so lucky.  This article right here says it all.  Notice headline: Martin Gerber gets chance to prove his net worth to Senators.  I think I speak for a lot of Penguins fans when I say Fleury has already proved himself to be healthy.  Now he has to prove he can take the Pens to the cup.

In any case, I guess we can expect the Gerber Baby in net tonight.

There has also been some instances in which the Ottawa media has put a "hit" on, a bounty if you will,  for Sidney Crosby.  Perhaps they feel if they're without a captain than so should the Penguins.  If Pittsburgh took that approach during the regular season, then Laraque/Ruutu would've been suspended for life and about 15 captains would be on the IR right now.

Oh yeah - and never mind the fact that Pittsburgh more or less won the Atlantic Division without their captain.  Although I'd hate to see the team lose one of their star players (notice: 'one of their'), Ottawa can do their worst and it would only make Pittsburgh stronger.

In efforts to keep the peace (for now), check out Scarlett Ice, another fine Senators blog.  Sherry did an excellent job of compiling the preview to tonight's game.

And to keep with the home colors, The Pensblog has been really on top of things with scouting out the enemy, picking fights and photoshopping the hell out of anything Ottawa related.

That about does it for now - more to come in the Open Thread, which should be up around 6:00.  Until then set your watches : 7pm in Pittsburgh.