Share All sharing options for: Jordan Staal can earn his colors (and paycheck) this season for Pittsburgh Penguins 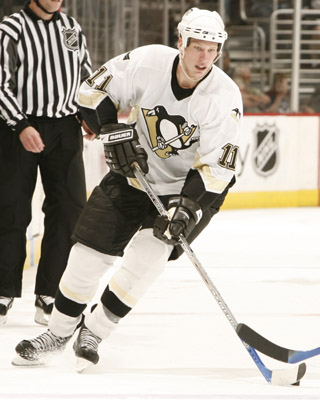 It was a great rookie year - 29 goals, 13 assists with much praise for stellar penalty kill (seven short-handed), power play (four) and clutch performances (four game winners) over 81 games.  Things were looking good despite a Pittsburgh elimination in the first round of the playoffs at the hands of the Ottawa Senators.

The following 2007-08 season carried great expectations for the 19-year-old as he entered into his sophomore year in the NHL.  He was ranked as a top tier forward, expected to provide a double threat on the PK and potentially even man, if not lead, the second power-play unit.

Pucks hit the iron, shots went "just wide" and soon enough the near 30-goal scorer of 2007 looked as if he'd hardly reach 15.  Sure enough,  his season total stood at 12.

If there was one guy on the Penguins who received his share of bad bounces last season it was Jordan Staal.  Loyal fans of the Pens know what he's capable of - they've seen it.  The loyalists remained hopeful as the season progressed, but even some of us (myself included) began ruling out a red light each time the puck hit his stick.

He struggled, he lumbered through the season and he provided dim sparks to the offense in the playoffs.  But this season will be different.

Staal is back on the wing.  Left wing to be exact.  And so far in the preseason he looks like a changed man.

In the two games he's played - the opener against Tampa and Wednesday's against the Leafs, Staal racked up a goal and two assists.  Maybe he just needed to get his confidence back.

This season Staal will add some extra depth to the Pens' roster, a roster a lot of so-called experts say took a hit this offseason.  It's amazing how not re-signing some guy who's playing in Detroit now (not Conklin) makes all the experts come out of the woodwork to say the roster is hurting.  There'd hardly be that much concern if that #18 guy wasn't part of the team last season.

Staal back on the wing as a second or third liner, perhaps even as the silent gunner on the second PP unit will be supreme.  If his efforts in the preseason are any indication of what the upcoming season has in store, then Jordan Staal will be back with a vengeance.