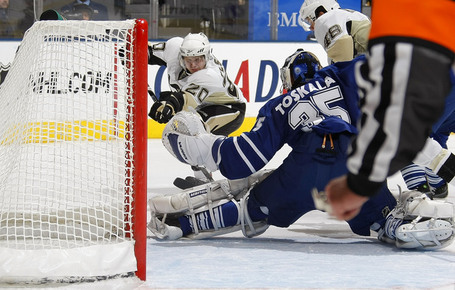 Hey guys, save it for the regular season.

I mean, it's nice and all to see the effort, but let's hope it follows you into October.  You know, when games really count.

Chalk it up for Sidney Crosby, Kris Letang and Matt Cooke for their third period goals that literally turned the game around.  The duo of Miroslav Satan and Ruslan Fedotenko teamed up to assist not only on Janne Pesonen's goal in the first period but also Crosby's third period notch.  Before the night was done, Fedo would eventually add a third assist as the secondary man in Letang's second goal of the preseason.  Sad way to get credit for it though - a shot off the face.  Letang looked a bit dinged up, but nowhere near the reconstruction that Hal Gill delivered to Ryan Malone on a slap shot last season.

The defensemen weren't exactly quiet tonight either.  Mark Eaton and Letang each had a goal, Alex Goligoski added two assists and Brooks Orpik even had a helper on the night.  All excellent signs when you have two of your top D-men out with injuries.

Marc-Andre Fleury was pelted with a total of 40 shots, more than any starter should have to handle in preseason play.  But he handled them well on his 36 save night.

Bill Thomas remained silent on the roster and may pose as a cut this weekend.  Pesonen's goal in the first period may have given him the shove, or at least more credibility, needed for the NHL roster.  Read Toronto's take at Pension Plan Puppets.

More after the jump.

The Good: Satan, Fedo and Crosby fulfilling expectations.  If the regular season demonstrates the same level of skill, this may very well prove to be one of the best lines in Pittsburgh in nearly a decade - matched only by last year's Syko, Sid and Gino line.

The Record: 3-0-1 during the preseason.  Every game has been decided by only one goal (shootout for Game 2 against Lightning).

The Digits: The Penguins' penalty kill has held opposing teams' power plays to an incredible 1-for-21 over four games.

The Next Game: October 2 against Jokerit Helsinki for what is the final exhibition game before the opener in Stockholm against Ottawa.