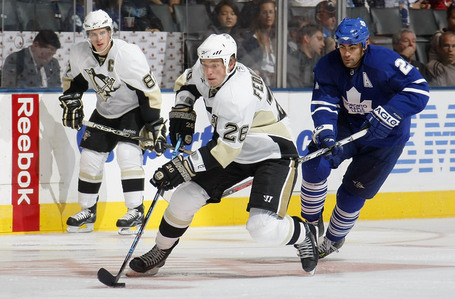 We'll get to Ruslan Fedotenko in a bit.  Let's start with the roster cuts.

The Pittsburgh Post Gazette reports the Pittsburgh Penguins cut two players from the preseason roster; defenseman Danny Richmond and forward Connor James (sorry SteelCityKid).  Still alive from the prospect pool: Janne Pesonen, Bill Thomas, Paul Bissonnette (featured in the Post-Gaz) and Alex Goligoski.  Out of the four I'm still sticking by my word and saying it's safe to say Goligoski is a lock.

Ever wonder what sports the boys played before they landed in Pitt?  It's not exactly a foreign concept.  Athletes have been known to take up another sport in the offseason in hopes of staying in shape during downtime.  Bo Jackson and Deon Sanders played baseball and football professionally (something we'll never see again), while other guys pursued it all the way to the draft.  Chris Drury of the New York Rangers was known for his baseball skills while playing in Connecticut.  I'm sure JDMaker knows, but former Atlanta Braves pitcher Tom Glavine was actually drafted by the LA Kings in the sixth round of the 1984 draft above some guys name Brett Hull and Luc Robitaille.  But can you actually imagine Sid as a catcher?

"I played catcher growing up. That would be my best chance to make it [in another sport].  I used to like catcher. It's a lot more action. You're calling pitches, and there's a little more thinking involved. It was cool. You had to study the other team a little bit, so it was a bit like preparing in hockey."

The Trib-Review feels Therrien is starting to lighten up a bit, and I guess that's a good thing.  All of the drama last year surrounding [alleged] talks of Brooks Orpik, Gary Roberts and Daryl Sydor wanting trades following the Mark Recchi situation may have in fact been true.  But Orpik signed an off-season extension, Sydor is still here (for now) and Gary Roberts is skating on a wheelchair in Tampa.  In other words, if Orpik didn't respect the guy and appreciate what he brings to the team, then he wouldn't have signed on again.

Therrien has apparently eased up just a bit on the tough love, either because he sensed that he needed to or because in the second half of last season and in the playoffs, there just wasn't that much to complain about.

In the Post-Gazette's coverage of last night's 5-4 win over the Leafs, readers and fans get a chance to see a different side of Ruslan Fedotenko.  It almost reads like the inside cover of a biography.

It was the spring of 1986, and he and his family were living in the suburbs of Kiev. They were pretty much oblivious to one of the most disastrous man-made catastrophes of the 20th century -- the nuclear accident at Chernobyl -- even though it was playing out less than 100 miles away.

Fedo jokes and kids about some potential side effects of living in that area.  He's already admitted that he can't grow a playoff beard as a result of the Chernobyl Meltdown, but I think that's more based on playing for the Islanders last season.  In fact, next to the Lightning's 22-game Cup win in 2004, Fedo has only made nine postseason appearances.

Something tells me we'll see this theory put to the test in April.