Pittsburgh Penguins check in from Sweden - Will last year's injuries stay in the past?

Share All sharing options for: Pittsburgh Penguins check in from Sweden - Will last year's injuries stay in the past? 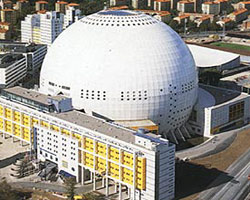 Some cool stuff on the Penguins' web site.  The team shot out to Sweden this weekend and posted up a few player interviews describing the travel and expectancies while overseas. I'm kind of curious to hear what you guys think about starting the season in another country.  Last season didn't bode so well for the Kings when they returned (or at all for that matter), but even the Stanley Cup defending Ducks squad was short of spectacular when they returned.  Will this have a negative effect on the team?

Joe Starkey broaches the uncomfortable topic of injuries surrounding the Pens in today's Trib-Review.  Think about the Pens' roster last season and try and count the number of guys who stayed healthy.  Off the top of my head I can think of Orpik, Gill, Ruutu and Conklin.  But then there were those guys who fought threw injuries.  Malkin had the flu in the Finals, Sykora battled through back spasms all season and Malone's face looked like it was used for target practice.

Let's face it - these guys put their bodies on the line every game they play.  We're bound to see someone go down for a game or two this season.  But let's just hope we don't have a repeat of last year's run.  I'm sure not many of us can deal with that again.

Then again, if a few injuries warrant a trip to the Finals, I could be sueded.