Next up for the Pittsburgh Penguins - Jokerit

Share All sharing options for: Next up for the Pittsburgh Penguins - Jokerit 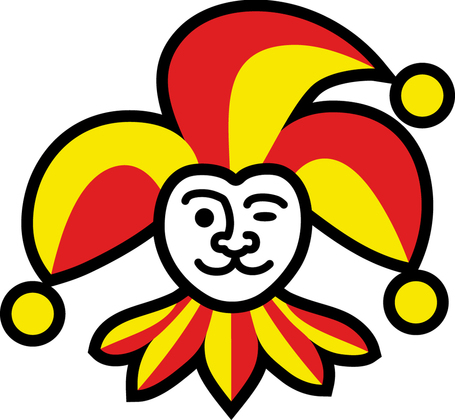 Apparently the Jokerit team has been around since 1967.  Who woulda known?  They were founded the same year as the Penguins which I guess makes it kind of interesting.  If you want to look at it that way.

The team hails from Helsinki, Finland, but during Thursday's preseason game will play out of Stockholm, Sweden against the Penguins in the last exhibition game of the season.

Sometimes you have to wonder how serious some countries take their teams when they come up with logos like this.  Then again, I do recall a little logo from the 90s that more or less destroyed the reputation of one club:

17 - The number of players and coaches on Jokerit whose names end with "en."  If you thought Philly was bad with their Timmonen and Pitkanens, this is going to take announcing to a whole new level.

But there is/was (not exactly sure if he's on the team now until I see the roster) one player on Jokerit who once donned the black and gold.  Remember Jani Rita?  Remember how incapable he was at adapting to the NHL?  Well apparantly for Jokerit he was more than just an above average player.

In a one-year deal with the team in 2006-07, Rita scored 32 goals and added 20 assists over 56 games.  Compared to his 9 goals, 5 assist over 65 games (and two teams in four seasons) that is pretty impressive.  I don't know where his contract sits right now with the team, but I'd like to see him out there on the ice if possible.

Then again, I won't be seeing this game and I'm sure most of you are in that same boat.  11:30 am on Thursday?  I guess that's what we get for having them open the season overseas.  My only concern is that their schedules are straight for when they play Ottawa this weekend and they can readjust in the week off in between.

Ironically enough, the Penguins and Jokerit have one more thing in common.  They both fought through financial ruin to remain alive in their respected leagues.