Sergei Gonchar out Pittsburgh Penguins lineup for up to six months

Share All sharing options for: Sergei Gonchar out Pittsburgh Penguins lineup for up to six months 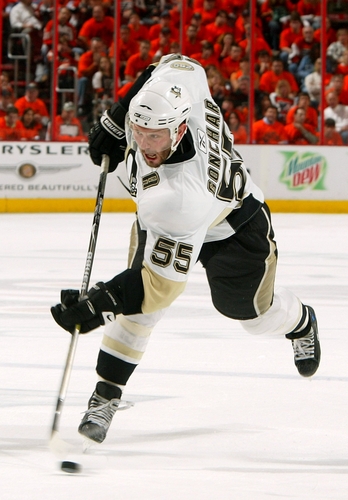 Metallica said it best on track 2 of their 1991 release The Black Album:

You know it's sad but true

Indeed it is.  By now you've heard, read (thanks hockeyjenn) or seen something somewhere, anywhere that mentions Sergei Gonchar's absence from the Penguins' lineup for the next four to six months.  But this shouldn't be the be all, end all to the season.  By no means.  Even Ray Shero expects the youngins to step up their play:

"It is always difficult to lose a very talented player and leader for an extended period of time, but we all believe this is the best decision for Sergei.  We are confident that he will come back strong after this surgery. In the meantime, we'll look to our other defensemen to step up in his absence."

Rest assured they will.  Alex Goligoski is as good as in by now, and Kris Letang will most likely pose as the key shot for the first power-play unit.  Maybe the two will gel again just like the old days.  But if Michel Therrien is big on one thing, it's constantly shuffling up the D-men.

Offensively, why worry?  That was hardly ever a concern for the Pens.  As long as the PP can get shots on , the big guys up front will be there to stuff it home.

It's looking more and more like Ruslan Fedotenko is set to be Sid's much sought after winger.  The Post-Gazette has that story.

Unless his illness is downgraded, or it's not nearly as big a concern as perceived, then the Penguins appear as if Petr Sykora is questionable for the season opener against the Senators.  The winger is currently battling an upper-respiratory illness.  On top of that, he flew all the way to Stockholm not feeling well.  So let's just hope it's not going to cause a bigger problem than anyone would want.  Take it from a guy who flew to Vegas with an ear infection, ultimately rupturing it and losing 5% of his hearing - flying sick is not fun.