FSN Announcers Paul Steigerwald and Bob Errey get some props

Share All sharing options for: FSN Announcers Paul Steigerwald and Bob Errey get some props

Usually fans reflexively vaunt the hometown telecast crew. Unfortunately, these two guys don't even get the proper amount of love in their own city of champions.

In the case of Steigerwald, the problem is that his predecessor, Mike Lange, winner of the Hockey Hall of Fame's Foster Hewitt Award for excellence in broadcasting, is only one booth down, working with Phil Bourque on the Penguins radio broadcasts. Lange, renowned for his beat-the-goalie-like-a-rented-mule-isms -- Randy Moeller is now working the same side of the street in Florida -- is an incredibly tough act to follow, but Steigerwald follows his own muse, keeping his calls shtick-free and refreshingly conversational.

Errey, a goal-scorer on the Penguins' fabulous Stanley Cup teams of 1991 and 1992, is also low-key although insightful. Former Hockey Night in Canada executive producer and ex-NHL director of broadcasting John Shannon thinks Errey has the goods to fill a national role as a color man.

There are many deservedly high-profile tandems working now - Jim Hughson and Craig Simpson on Hockey Night, Gord Miller and Pierre McGuire on TSN, Doc Emrick working with anybody anywhere -- but Pittsburgh's telecasts are direct and informative, what On The Fly likes to call hockey for adults.

#1, congrats to Steigy and Errey; it's always nice to hear nice things about yourself.  We all may have our thoughts about Mike Lange getting replaced and some of the idiosyncrasies of the new crew, but Pittsburgh fans probably have it better than we think.

#2, a shoutout to Steigy and Errey but no mention for Dan Potash?  Booo!

After the jump, just for fun, one of Bob Errey's biggest (recent) hits.  A math formula, if you will. 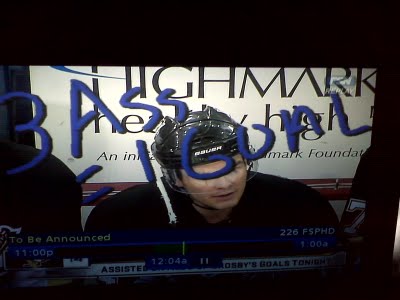 Yes, any excuse to use that one.