Share All sharing options for: Sidney Crosby's Rob Scuderi-like save 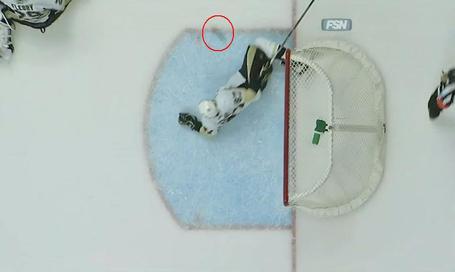 By now Rob Scuderi's goaltending abilities are a part of Pittsburgh Penguins lore that will forever be hailed as the stuff legends are made of.  Who can forget his incredible work that came at such an important time in Pittsburgh's Stanley Cup run?

That is why whenever a player in the black and gold drops down to block a shot near the crease you will forever hear whispers of "Rob Scuderi," whether watching or listening to the game.

Last night the Pens pulled out a sloppy win.  It wasn't picture perfect but it all looks the same on the scoresheet.  Slap another one in the 'W' column, and a timely one at that as the Pens try to keep their unbeaten record on the road intact.

At times last night Marc-Andre Fleury was caught out of position.  Not his fault entirely, although it's pretty common around Pensburgh threads for readers to beg him to "stay in the net!"  In one instance where MAF went to play the puck but was caught out of position on a redirect, Jordan Staal came up big on a defensive play that literally robbed Anaheim of what appeared to be a definite goal.  Pic of that one is available up on Pens Universe as well (second one down).

And then, later in the game, Crosby steps up and makes that ridiculous pad-stacking save to keep the Pens in it long enough to simply hold off the Anaheim attack.

This is the sort of team the Pens have this year.  An all or nothing, do or die attitude that has no doubt carried over from last year's run, on through the offseason and right up until this point.  I don't see it stopping anytime soon, as it would appear this team is fully prepared and knows how to get it done even with big names like Evgeni Malkin and Sergei Gonchar on the shelf.

To other teams trying to get past the Pens - good luck beating three or more goaltenders.