Checking up on the kiddos: Penguins Prospect update

Share All sharing options for: Checking up on the kiddos: Penguins Prospect update 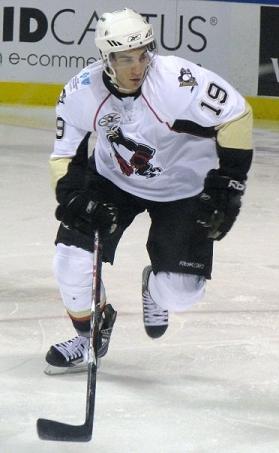 A couple weeks into the season, now's as good a time as any to check up on how the Penguins of tomorrow are doing.  This is a feature I like to do from time to time, so let's see how the young bucks are doing.  Today we'll look at the forwards, and tomorrow will be time for the defensemen and the goalies.

Andy Bathgate [5th round pick, 2009] - the famous namesake of his grandfather is in his second full year in the OHL, playing on a bottom dwelling Belleville team.  So far it's been rough.

Luca Caputi [4th round pick, 2007]- Caputi, a big time prospect for almost three seasons now, continues to grow in Wilkes-Barre.  He's second on the team in goals, and third in penalty minutes.  That's what you want out of a power forward, isn't it?

The rest of the young forwards after the jump..

Joey Haddad [Undrafted] -  Haddad, though putting up decent stats, got an attitude adjustment from the Wheeling coach by making him a healthy scratch.  This is his first year as a professional and often times players have to adapt to giving their top effort every single night.  Hopefully Haddad gets the message so he can stay on the prospect watch.

Dustin Jeffrey [6th round pick 2007] - Jeffrey's now the leading scorer for the Baby Pens.  At the AHL level he's proving to be a solid playmaker.  Last year he got 14 games in the NHL, and he seems to be a good candidate for another call-up if needed.  Until then he's continuing to grow and develop in the A.

Nick Johnson [3rd round pick, 2004] -  Johnson impressed in training camp and was among the final cuts to be made, drawing comparisons to another big forward who went the college route, Ryan Malone.  But it's been a tough start to the season for Johnson, who hasn't gotten much point production.  Johnson had a nagging ankle problem, which may have limited what he can do.

Ben Hanowski [3rd round pick, 2009] -  Hanowski's a natural goal scorer, setting marks all-time in Minnesota.  So far it seems he is off to a decent start as a true freshman at St. Cloud State. College hockey is often played by guys 21-24 years old, a few years older than traditional college students, so nice to see the only 1990 born skater on his team starting off well.

Mark Letestu [undrafted] -  A previously unmentioned minor injury to Sidney Crosby was the reason Letestu spent a day as a Pittsburgh Penguin (though he didn't play).  Letestu missed the beginning of the season recovering from a shoulder surgery but is back as one of the most dynamic players at the AHL level.  He's 24 years old, no spring chicken, so it'll be interesting to see if Letestu can get a chance at the NHL at some point this season, and whether or not he can capitialize on that shot.

Nathan Moon [4th round pick, 2008] -  As an over-ager, Moon should be having a solid year in the OHL.  It started out rough with just 5 points in 11 games, production that is not going to turn many heads for a guy still looking for score a professional contract with the Penguins.  Moon's rebounded lately though and may have turned it around, given where his statline is at now.

Nick Petersen [4th round pick, 2009] -  Petersen is off to a great start in the high flying Quebec Major Junior Hockey League.  He's missed eight games but is still second on his team in goals and first in plus/minus.  The Sea Dogs are one of the finest teams in Juniors, and Petersen is amongst the oldest players, and based off the start, they both ought to have a great seasons.

Casey Pierro-Zabotel [3rd round pick, 2007] -  A victim of a deep Wilkes-Barre team, CPZ has started the year out in Wheeling.  Pierro-Zabotel leads the club in assists early in his first professional season.  As injuries and call-ups thin out the AHL ranks, he probably will find himself given a chance at the AHL if he keeps up the good work.

Eric Tangradi [2rd round pick, 2007 (ANA)] -  Tangradi is arguably the #1 prospect of the Penguins, but a shoulder injury derailed his rookie season just a few games in.  The good news is that he is close to returning to the lineup to continue to get the necessary introduction to professional hockey so that hopefully he'll be better for it in the long run.

Keven Veilleux [3rd round pick, 2004] -  Veilleux, like Tangradi, has only gotten into a handful of games due to an injury (hip for him).  The sizable Veilleux has impressed with his pure skill but, also as advertised, has been almost invisible at times on the ice.

Joe Vitale [7th round pick, 2005] -  Vitale's one of those players that's like fingernails on a chalkboard to his opponents, and he's gotten under the skin of the opposition a time or two in his first ten games.