The best swag in the Penguins charity gift-baskets

Share All sharing options for: The best swag in the Penguins charity gift-baskets 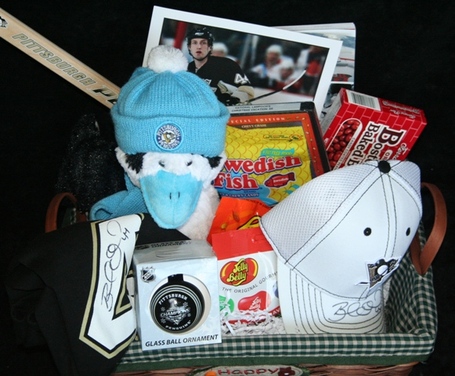 There's candy in Brooks Orpik's gift basket, but rest assured it is not free.

(image at the courtesy of NHL Auctions)

The holiday season is a time of giving and gifts.  The Penguins wives and girlfriends are spear-heading gift baskets for the fourth year in a row.  The idea is to fill them with momentos and things the player likes and auction them off to fans, with the proceeds going to charity.

Let's dive into these bad boys and see who's got the best stuff.

This is only what's visible in the pictures, there could be a lot more.  Current bid is bolded.  Let's look at the top 5:

#5 Chris Bourque -- The former Penguin put a nice basket together, and for the current bid it offers a lot of bang for the buck.  There's no fewer than seven autographed items, including a cool old-style logo Penguins shirt/sweatshirt, four Penguin hats and a nice Penguin snowman/woman decoration. $240

#4 Evgeni Malkin -- No less than five autographed items (the mini-stick, a hat, a shirt/jersey, an ornament and a puck) in Geno's basket.  Currently the highest price basket. $1,191.87

#3 Bill Guerin-- Four bobbleheads, a signed puck, Stanley Cup champion t-shirt, and I swear it looks like there's a beer in the back left corner of the basket. $720

#2 Max Talbot -- Looks really stocked with more items than the average bag.  A #1 fan foam finger, a Stanley Cup bobblehead, a couple hats and a signed shirt/jersey are a few of the visible items in Talbot's basket.  Also it comes in a bucket that a lot of places put beer in, rather than the typical basket. $573

#1 Mike Rupp -- A signed replica jersey AND a signed shirt/jersey gives Noted's basket a leg up on the rest.  Throw in a remote-control truck, a cool hat (signed of course) and some Starbucks.  $524.50

A lot of these are standard with pretty much the same stuff -- signed shirts, Penguin hats, etc.  Well, there's one giftbasket that's unique with no sign of any hockey/Penguin merchandise or memorabilia.

Kris Letang -- What appears to be no less than 20 chocolate bars, the board game Operation, and maybe a Metallica CD?  No visible Penguin items to be found. $640

Food items are rare this year, but if you're wondering Brooks Orpik does have candy in his (see above).  So that's the list of the Pens gift baskets, anything that catches your eye?  And if any readers bid/win on a basket, please let us know how it turns out!