All across SB Nation, the team-blogs are contributing to a preview of players on their teams and the chances they face to make their respective countries Olympic team in Vancouver in the upcoming games.

Behind the jump let's take a look at the Penguins who won't be having a nice two week vacation in February. 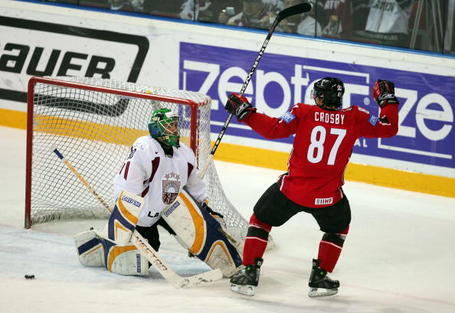 Sidney Crosby (CANADA) - Canada, who suffered a disappointing 7th place finish in 2006, is eager to add a former scoring champion, NHL MVP and the youngest captain to ever claim the Stanley Cup to the club.  Despite the snub in '06, Crosby's got international experience; he was the youngest player to ever score a goal in the World Junior Championships (WJCs) in 2004 and led Canada to a gold medal in that tournament in 2005.  Crosby also ran with the Olympic torch through his home province of Nova Scotia.  He's the lock of locks to be Canada's #1 center with two strong, sniping power forwards in Rick Nash and Jarome Iginla having the inside track to be the wingers. 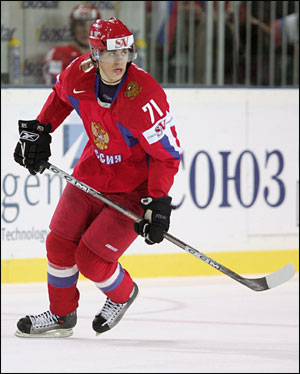 Evgeni Malkin (RUSSIA) - The reigning Art Ross and Conn Smythe winner is a surefire Olympian for the formidable Russian team.  Malkin's also a decorated international player: winning two silver medals in the WJC's in 2005 and 2006, and he's played in the World Championships (when not in the NHL playoffs) in 2005 and 2007.  Further, Malkin scored six points in seven games for Russia in the 2006 Olympics in Turin (the season before he came to the NHL).  During the summer he practiced at Russia's orientation camp on a line with Ilya Kovalchuk, which is frightening to think about what those two could put on display. 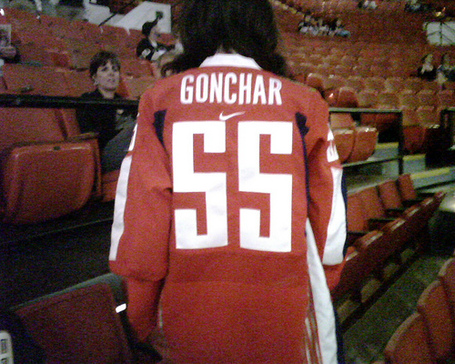 Sergei Gonchar (RUSSIA) - Gonchar is the Pens #1 defenseman, he can do it all: lead a power-play, rush the puck, make smart passes, get the puck on the net, and also eat up 25-27 minutes a night and play smart, positional hockey in any situation.  It's easy to figure that Russia will use him in a similiar role.  Sarge is a highly decorated international competitor; he's appeared in the last three Olympics  -- winning a silver medal in 1998 and a bronze in 2002.  All that's missing is the gold. 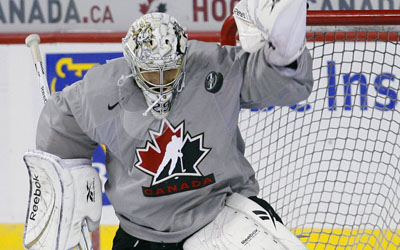 Marc-Andre Fleury (CANADA) - The only thing preventing Fleury from the Olympics is the sheer depth of players at his position from Canada.  But Steve Mason and Cam Ward (the other leading contenders from summer camp) fell on their faces this season, so Fleury has to be a top contender to  make roster.   Team Canada figures to lean on New Jersey's Martin Brodeur and Vancouver's Roberto Luongo for all the playing time, even if Fleury's resume over the past year cannot be touched in terms of winning hockey games.

Fleury's international experience is mainly remembered by a huge gaffe in the gold medal game of the 2004 WJC .  He tried to clear the puck and it hit a teammate and ended up in his own net, which proved to be the game-losing goal for Canada.  However, Fleury was named tournament MVP of the WJC's in 2003, and save that one mistake in '04, has generally been solid in his international experience. 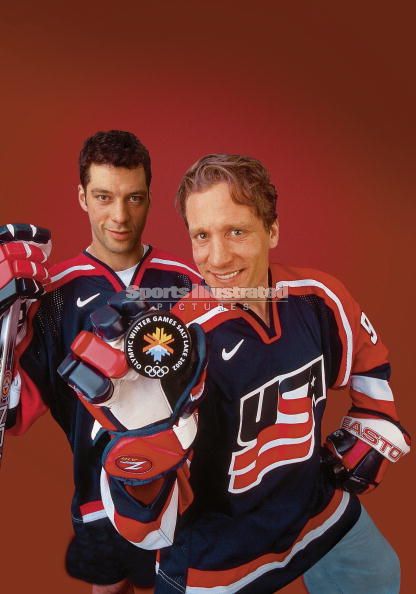 Bill Guerin (USA) - At age 39, Guerin's a tested warrior.  He's kept up pretty well with no less than Sidney Crosby all year, so Team USA could do well to add him and not have to worry about his gameplay (6 goals, 11 assists in 28 games his season).  What doesn't bode well for Guerin is he wasn't invited to the summer camp and may not be on the radar as much as some younger wingers who're having solid years.  Guys like Jason Blake, Jason Pominville, Jamie Langenbrunner could be fighting for a spot or two.  Also fellow old war-horse Mike Modano (3 goals, 5 assists in 14 games) is still in the picture and could be the graybeard that USA chooses instead.

In all likelihood the Yanks will tab someone younger, but Guerin ought to be in the conversation for an American team that could use his leadership and experience.  That calming presence in what will be a mainly young American locker-room could be a big benefit alone, as the Penguins can attest to from last spring.

Brooks Orpik (USA) - Team USA seems really wide-open in terms of personnel.  Aside from Brian Rafalski and Ryan Suter, one could argue the rest of the defense is on the bubble.  Some of the names in the mix with the most consideration: Paul Martin (who Brian Burke has spoken highly of), Mike Komisarek, Ryan Whitney, Erik Johnson, Tim Gleason, Tom Gilbert, Jack Johnson, Ron Hainsey and Rob Scuderi.

Orpik's case could be the closest call of any Penguin.  He plays top unit minutes for Pittsburgh and often matches up at even strength against the opponent's top line.  Though Orpik's not much of a goal-scoring threat, he's on pace for a career high 26 assists -- something that accurately reflects his ability to move the puck effectively in the offensive zone.  He skates well for a guy that's 6'2, 225 lbs and is always among the league leaders in hits and blocked shots.  With 400 career NHL games, he has significant experience against the top players that he'd have to face.

Penguins GM Ray Shero is a part of the USA brain-trust, and the truculent endorser himself, Brian Burke, is calling the shots -- two guys who have to like Orpik's style.  But do they favor Orpik more than maybe Komisarek and the a Johnson?  That's what it may come down to. 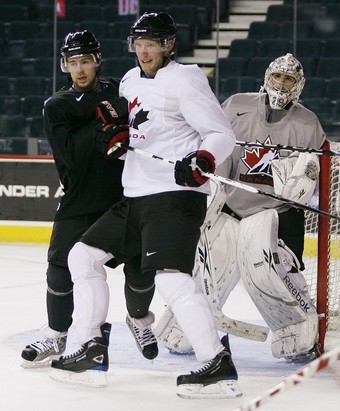 Jordan Staal (CANADA) - A somewhat surprising invite to Canada's summer camp, Staal could be a role player to make it.  Some reports say he's competing with a host about five or six players for two roster spots.  These are likely going to be checkers/grinders/all-around forwards like Mike Richards, Shane Doan, Patrick Sharp, Ryan Smyth, Brenden Morrow and Dan Cleary.  Probably a tall order to knock some of those guys out, but Staal does have sublime size and skill and the added flexibility that he can play center or the wing.  Given who Canada could trot out center (Crosby, Getzlaf, Lecavalier, Thornton, E. Staal, Toews, Carter/Richards) it may be that Jordan goes as a winger, if he somehow squeezes in. 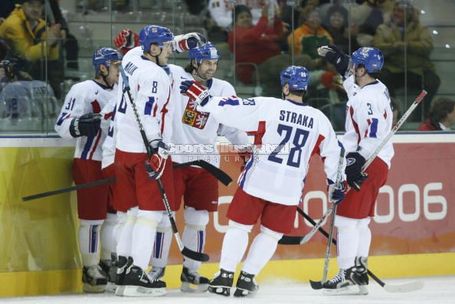 Martin Skoula (CZECH REPUBLIC) - Skoula represented the CR in the 2002 Olympics, but wasn't picked in 2006.  He's been a solid fill-in for Pittsburgh and the Czech's don't have that deep of talent on defense once you get past Tomas Kaberle.  Perhaps Skoula could be in the running as a long shot, but it looks like he might slide under the radar. 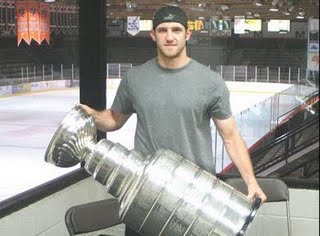 Alex Goligoski (USA) - See the Orpik note for the big mix of defenders vying for Team USA.  Goligoski was among the leaders in defenders in points and plus/minus before he suffered a groin injury in November.  Despite his recent excellent play, Goligoski has less than 70 NHL games under his belt currently and is probably just too much of a late riser for 2010.  There's no doubt Goligoski's star is rising, but he's just out of time to crack the Olympics this go around.

Those are all the Penguins with realistic chances or expectations of Olympic considertion.  In the most common scenario I see four Pittsburgh players going (Crosby/Fleury to Canada and Malkin/Gonchar for Russia).  Orpik probably has a fighting chance, Staal maybe on his luckiest day and Guerin if there's injuries.  For everyone else it's probably vacation time.  And in case you were curious about the under-the-radar countries: Ukraine failed to qualify for the 2010 Olympics, leaving Ruslan Fedotenko a man without a team.