Billy and the Kid: Pens beat back the Avs 4-1

Share All sharing options for: Billy and the Kid: Pens beat back the Avs 4-1

The newspaper will say 4-1 tomorrow, but that really doesn't do justice to how tight a game it was.  For the majority of the game, real estate was tight to come by.  The television guys accurately called it "marking up" as if guys were playing defense like they were on the soccer field.  There wasn't much open room for good chances.  The difference was a quick whistle and the Penguins power-play finally coming through.

T.J. Galiardi opened the scoring for the Avs on the power-play when he steered Darcy Tucker's effort past Marc-Andre Fleury.  Jay McKee was in front of the net with Galiardi and has to do a better job to take the man or the stick out of the play.

It appeared Colorado would take the lead into the intermission until the impromptu line of Mike Rupp - Sidney Crosby and Evgeni Malkin struck.  Malkin upped the puck up and Rupp and Crosby passed the puck twice and #87 put it in an empty cage past a beaten Peter Budaj. 1-1 at the first break.

There'd be no more scoring until the third period; which was a huge break for Pittsburgh.  It appeared Galiardi had his second goal of the game, between Fleury's legs, but the referee from the side angle whistled the play dead, all the while the puck was in motion, and in the back of the net.  Unfortunately it's a play that can not be review.  It ought to have been a goal.  But it wasn't.  Just a bad break for Colorado.  Things have a funny way of evening up in a long 82 game season and hopefully they'll get the good end of a call soon to make up for it.

With the game still 1-1, the Penguins got a two man advantage.  They couldn't quite take advantage of it, but Crosby faked a shot and wired a perfect pass to Bill Guerin for a slam dunk goal.

That effectively ended the scoring, with Jordan Staal and Crosby tacking on empty netters to make the score look wider than it was.

It was a good night indeed.  Crosby and Malkin put three points in their pocket and the team gets 2 of their own in the standings.  It was a quirky, hard-fought one that wasn't easy it looks at the end of the day.  But it's still a win.

Now onward to Saturday...I hear an old friend is ready to say hello again...Perhaps you remember him.. 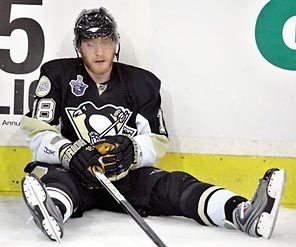