Tracking the toughest players in the NHL: The Black and Blue Trophy

Share All sharing options for: Tracking the toughest players in the NHL: The Black and Blue Trophy

Something I like to track is an informal black and blue trophy, a simple measure of hits plus blocked shots.  And, on the heels of a good read on the official site about Brooks Orpik's hits, why not unveil it on Pensburgh? 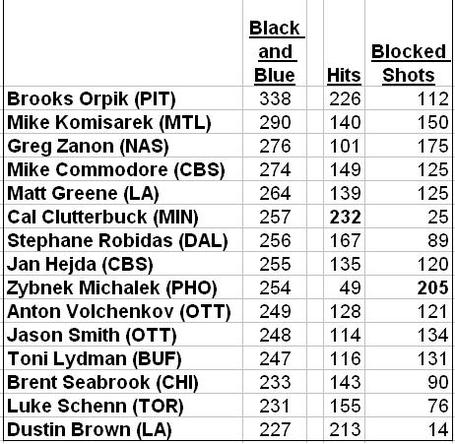 Admittedly, this measure isn't perfect.  It is at the mercy of the statisticans around the league, all of whom naturally have variances what they consider a "hit".  As Orpik points out from the article linked above:

“The actual stat is really misconstrued, it’s more of an opinion. It’s different at different rinks. I was joking with someone the other day that if you played for the Rangers you’d have 1,000 hits a season. You go to other places, like New Jersey, and you have to take someone’s head off to get one.”

TSN has another tracker, which somehow takes into account giveaways, takeaways and faceoffs and Orpik has a 4.73 rating, which is good enough for first there too.

One impressive thing from the chart above has to be Anton Volchenkov, an annual contender for the black and blue trophy.  Volchenkov has only played 45 games this season but still is up there in the overall rankings.  The Black and Blue Trophy, though flawed, does reward toughness and durability