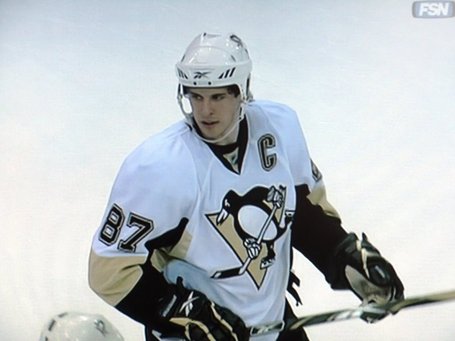 Eagle eye observers, like Jodie at the Sidney Crosby Show might have noticed that Sidney Crosby was playing without a visor for the first time in his NHL career.

According to Chris Kunitz, who appeared on Mark Madden's radio show in Pittsburgh: Crosby and Marc Savard were chirping at each other but Savard did not want to fight since Crosby wears a visor.

Savard has has gotten into one regular season fight in the NHL back in 2003 (against current Penguin Philippe Boucher!) according to hockeyfights.com, so it would have been interesting to see him and Crosby--two smaller centers known for their playmaking abilities, not punching abilities throw them.

Needless to say, the fight didn't happen even though Crosby did his part to get the fight going, we can't say that Savard backed down or anything but given how willing Sidney has been to drop his gloves who knows.

All things considered, maybe it's a good thing that Crosby didn't put himself in the penalty box for 5 minutes: Sid got three assists on the game, Savard generated nothing.