Thoughts from being at Game 1

Share All sharing options for: Thoughts from being at Game 1

Interesting times in DC.  Wear a blue Penguins jersey there and the fans will call you (as they walk by, never to your face) a word that starts with Q and a rhymes with "fear".  Whatevs.  At this point all that needs to have been said about the game pretty much has been said in the past 24 hours, but here's what I thought from being there: 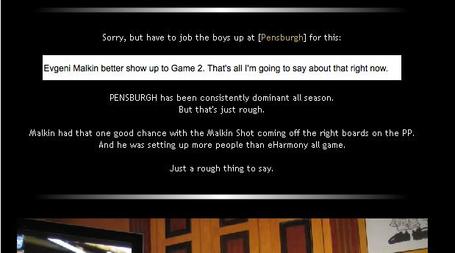 --Figure out something on the power-play to convert

--Stay out of the box whenever possible....This isn't the Philly series anymore.  Being as Pittsburgh only took one foul (and the automatic delay of game), so far so good on that front.

--Keep the shot total up on Varlamov.  Make the rookie make the saves...He did yesterday, but he's been known as a

--Keep Ovechkin's chances to the outside where he is less effective.