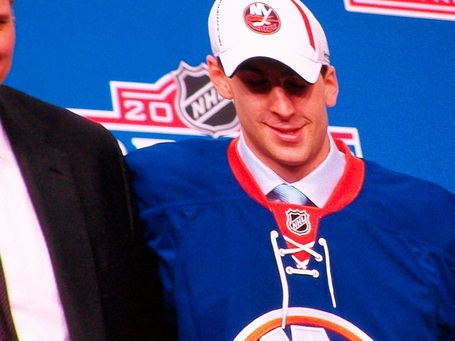 Man, leave it to me to click it with his eyes closed

With the first selection in the first round of the 2009 NHL Draft, the New York Islanders selected John Tavares.  The decision shouldn't come as any real surprise.  I mean, despite all the rumors that Victor Hedman and Matt Duchene were rumored to be the next big name on Long Island, this move strikes me as the obvious one for a franchise looking for a young scoring spark and someone to market around.

It easily took Tavares about three minutes to make his way to the stage.  Practically everyone in his row offered up a handshake and/or hug.  For more coverage of the pick, check out Lighthouse Hockey.

Sometimes people forget this is the kid that broke Wayne Gretzky's scoring record with 72 goals as a 16-year old back in 2006-2007.

Like [Phil] Esposito, Tavares is not blessed with blinding speed or an effortless stride.  But like Esposito, one of the greatest clutch scorers of his generation, Tavares is deadly from inside the hash marks and has a penchant for scoring big goals.

The talented center split the season between Oshawa and London, putting up incredible numbers with both squads. He finished the season with 58 goals and 104 points in just 56 games. He netted another 10 goals and 21 points in 14 postseason games.