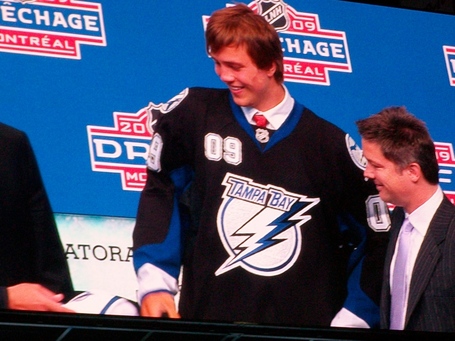 With the second pick in the 2009 NHL Draft, the Tampa Bay Lightning selected Swedish defenseman Victor Hedman.  The pick makes sense for Tampa, a team that desperately needs help on the blueline.

Patience will be a virtue when it comes to this celebrated prospect, who has drawn early comparisons to Chris Pronger and Jay Bouwmeester.

The teen has spent the past two seasons playing against men twice his age in the Swedish Eliteserin, the country's best league, and didn't look out of place.

He has excellent offensive instincts, which makes sure that he gets involved in the play frequently. He's got amazing vision and play making skills which make him more then adept at running the PP, he still gets plenty of time on the PK and is on the top pairing there, so defensively he is proficient as well.