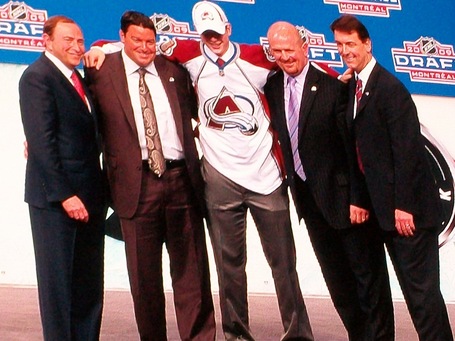 With the third pick in the 2009 NHL Draft, the Colorado Avalanche select goal-scoring forward Matt Duchene.  Initially rumored to be on the Islanders' radar, Duchene landed more or less where scouts and pundits expected him to go.  Check out Mile High Hockey for fan reactions and info.

The list of what Duchene could contribute in the NHL is impressive. Duchene was voted best playmaker and stickhandler in the Eastern Conference by OHL coaches, but it's his skating that sets him apart from so many others.

A complete player, along the lines of a Steve Yzerman.  Duchene has impressive speed and checking ability, and this year he showed that he has outstanding hands and can come through the clutch.

Along with speed and talent, Duchene has above-average hockey sense, which means he will be able to handle himself at both ends of the ice.