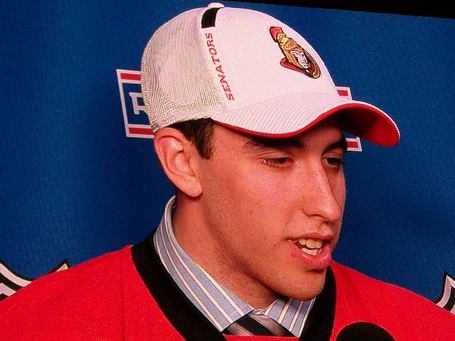 With the ninth overall pick in the 2009 NHL Draft, the Ottawa Senators selected Jared Cowen.  At 6'5", Cowen may one day fill a big defensive defenseman role for the Sens.  Silver Seven Sens has more.

He is underrated offensively, but in today’s NHL, he is likely destined to play a shut-down role with his size, mobility and reach. It will take time for Cowen to adjust to the speed in the NHL, but his Adam Foote-like grit will serve him well.
Hockey's Future

Won't be a flash scoring d-man but will be a franchise cornerstone because of his intensity and character.
2009 NHL Draft Guide, International Scouting Services

He uses his size and reach effectively to break up passes, win battles on the boards and move opposing forwards from the front of the net. With his strong hockey sense, skating and puck skills, Cowen is also very adept at making first passes or carrying the puck out of the zone, himself.