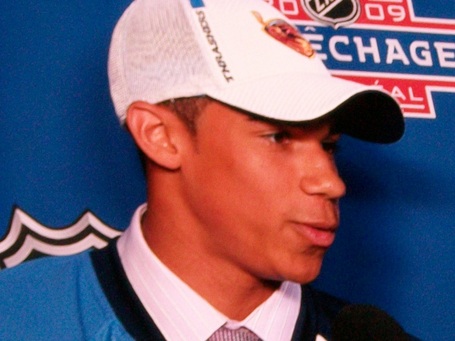 With the fourth overall pick in the 2009 NHL Draft, the Atlanta Thrashers selected Evander Kane out of the WHL's Vancouver Giants.  Kane was a big name in this years draft and definitely someone who stood out on Atlanta's radar as a big addition to the top lines.  I'm sure Matt from Bird Watcher's Anonymous is beyond stoked right now.

While he is a premiere junior, he will need some time to adjust to the speed and size of NHL opponents. While recognized for his offensive prowess, Kane could very well find himself destined for a less prominent, but valuable role in professional hockey.
Hockey's Future

Kane wants the puck in all situations and is capable of breaking open a game with his ability to score goals and create offence.  The feisty winger plays a fearless game and drives to the net with a reckless abandon. He loves the challenge of facing the top defensive pair every night forces them to be at their best.

Kane's offensive skills are not eye-popping, but he was the picture of offensive consistency for a strong Vancouver Giants team this season.  He does not fear going into the corners or to the places on the ice where he has to pay a price for scoring chances.
The Hockey News