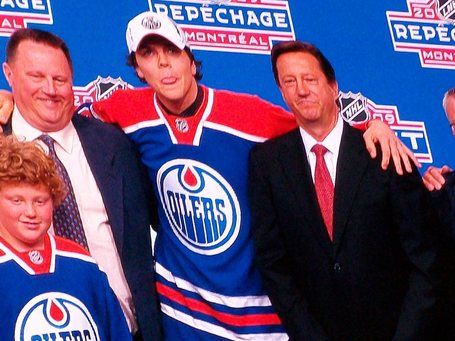 With the tenth overall pick the Edmonton Oilers selected Swedish and speedy forward Magnus Paajarvi-Svensson.  Known to fans as MPS or MSP (seems to be interchangeable), there's a good chance that he may take a straight jump to the NHL after spending last season in a highly competitive Swedish league.  Copper and Blue has more.

He has tremendous speed and skill and it's a matter of his game maturing as he gain more experience.
The Hockey News

Paajarvi-Svensson had just 7 goals and 17 points in 50 regular-season games this season, but it's important to remember Paajarvi-Svensson is a teenager playing with Timra's senior team in the Swedish Elite league, a professional league believed to be on par with, if not slightly better than, the American Hockey League.

A natural athlete that has an impressive power to speed to ratio that makes people stand up and take notice. When Paajarvi-Svensson is coming down the wing with the puck at full speed he will cause Defenceman absolute fits trying to contain him.