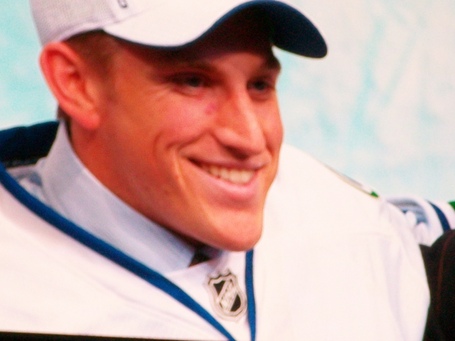 The Vancouver Canucks selected right winger Jordan Schroeder with their 22nd pick in the 2009 NHL Draft.  At 5'9" everyone has something to say about his height, but the one thing that seems to be floating around is that he is a highly skilled with the puck and a strong skater.

Schroeder has a tremendous package of skills that will translate well to the pro level if you can overlook the fact he's undersized [5-foot-9].  Some scouts have compared him to Brian Gionta.
The Hockey News

Do not let his size fool you, as this kid can be a dangerous force offensively and has the skills to make even the most astute defenceman look silly.
Shane Malloy
TSN

Schroeder is remarkably strong on his skates and while he is still growing into his body, the strength that he now has he uses to great advantage. This can be seen in areas such as protecting the puck and his play along the boards. Schroeder has also demonstrated that he can handle the physically punishing aspects of the game as well.